Razorist.com
Home Shaving Schick Vs. Gillette Men’s Razors: What’s the Difference and Which is Better? When it comes to shaving, there are plenty of companies out there that sell razors. But perhaps the two biggest names in razors are a couple of companies that have seemingly been around forever: Gillette and Schick.

Combined, these two brands have about 60% of the razor industry, with Gillette boasting about half the market and Schick coming in with about 10%, according to news reports.

If you don’t pay as close attention to razors and shaving as we do, you might be wondering exactly what the difference is between these two major brands. More importantly, which is the better razor for your shave?

Below, we highlight some of the differences between each and give you our thoughts on which we like better.

As with many brands these days, both Gillette and Schick are owned by much larger companies.

Gillette is part of Procter & Gamble, the conglomerate that owns some of the world’s most famous household names like Downy, Tide, Charmin, and Head & Shoulders. The razor brand was bought by P&G back in 2005.

Schick is part of the Edgewell Personal Care lineup. While Edgewell is not quite the household name of Procter & Gamble, it owns a number of famous names, including Hawaiian Tropic, Playtex, Wet Ones, and Banana Boat.

If you’re looking to support an independent razor manufacturer, they seem to be getting more rare. Dollar Shave Club is now owned by Unilever. Harry’s was set to be acquired by Edgewell before the deal was blocked by the Federal Trade Commission. As of now, it’s still an independent company.

This includes the Mach3, Fusion5, the Fusion ProGlide, SkinGuard, as well as a number of other variations, including handles with powered vibration.

That’s not to say having fewer options means you won’t find a razor you like from Schick. In fact, one of our favorites comes from the brand. However, if you’re someone that likes you have lots of options, then Gillette is the clear leader in the field. To be sure, no razor we’ve tested from either Gillette or Schick is lacking when it comes to lubrication. It’s more of a matter of personal comfort. Some people appreciate lubrication that only adds a little slickness to help the razor move easier. Others like lots of thick lubrication that provides a shave you don’t really feel.

In our experience, the Schick Hydro 5 (shown above) offers more — and thicker — lubrication than anything we’ve tested from Gillette. The Hydro 5 features seven “gel pools” across the top. As you shave (especially your first few shaves) the lubrication goes on heavy and the razor glides easily across your face.

If you’re someone that enjoys lots of slickness in your shave, then you might appreciate the Hydro 5.

Schick Offers Razors Made in the USA

On Razorist, we’ve reviewed dozens of blades, but very few are made in the United States. Razors are made around the world, including Germany, Mexico, Poland, South Korea and more.

If buying American is important to you, the Hydro 5 is one of the only options you have. 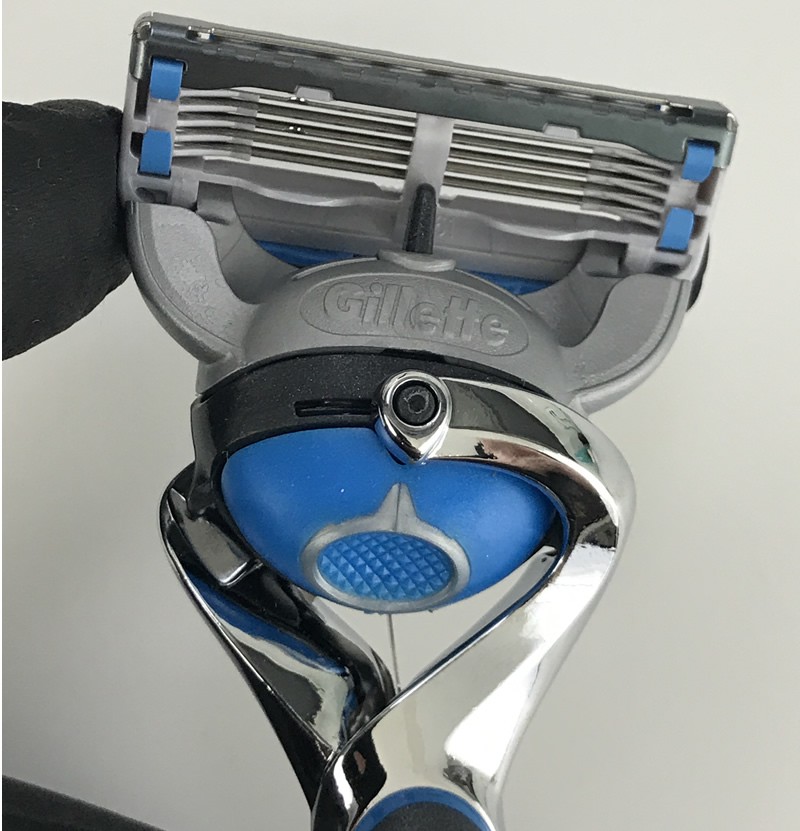 Today’s razors are the most complex ever made, with more features than ever. And the technology has moved well beyond just adding more blades to the razor head.

Perhaps the most visible sign of advancement is in the pivoting in today’s blades. Heads that move back and forth a little to go around the curves of your face have been around for a long time. Now, pivoting is moving to the handle.

Gillette offers the Flexball, which pivots left and right on the handle to give an additional range of motion in shaving. It’s definitely unique among razors we’ve tested.

As an answer to the Flexball, Schick offers “Shock Absorb” technology. While the razor cartridge pivots back and forth as you’ll find on any other razor, there is also another pivoting point built into the handle. Thus, there is a sort of “dual action” pivot on the head. There are lots of advancements in shaving where one company comes out with a feature and others mimic that design.

One unique thing we’ve found is that the Schick Quattro Titanium offers tiny wires that go over the edge of the razors. In the photo above you’ll see seven strands that run over the face of the blades.

We’ve never seen this on other razors from either Schick or Gillette. Why does it matter?

In our review of the Schick Quattro, we found that these wires help to keep the blades from direct contact with the face, meaning it still cut close but also felt amazingly smooth when making a pass.

Given they are the two biggest names in shaving, many people want to know which brand makes a better razor.

While we haven’t tried every razor from both companies, we have tried a number from each, including the Schick’s Quattro and Hydro 5, as well as Gillette’s Fusion5 and ProGlide.

So which is better?

To be sure, if you have hair on your face, either one of them will give you a nice, smooth shave. In our testing, however, we’ve been more impressed with the design and quality of Gillette razors.

Furthermore, every razor from the brand that we’ve reviewed has felt high quality. There are no rattles or loose parts. When the razor head pivots, it springs back into place as soon as pressure is released. To us, the razors feel like the Mercedes of shaving.

Beyond that, the shaves we’ve had with Gillette products are also near perfection. We never have tugging, pulling, or snags. Even a couple of days’ growth is easily shaved without having to go over sections again and again. Each shave is smooth, as you’d hope it would be.

Gillette also gets marks for consistently pushing new features like the Flexball and a powered handle.

Now, this isn’t to say that the Schick razors we’ve tried don’t offer a good shave. They certainly do. However, in our opinion the Gillette options just do things slightly better overall. For example, we found the Hydro 5 “Shock Absorb” feature to be distracting and there was a slight about of “play” in the handle and razor connection that made it feel lower quality.

The Schick Quattro Titanium — despite being a “simpler” razor — is one of our favorites for its great comfort when shaving. Even so, we’d still choose Gillette Fusion over the Quattro.

Bottom line: Both offer good shaves with no tugging, pulling, nicks or cuts. But if you asked us to choose which we thought was better, then the Gillette razors we’ve tested would be the clear leader.