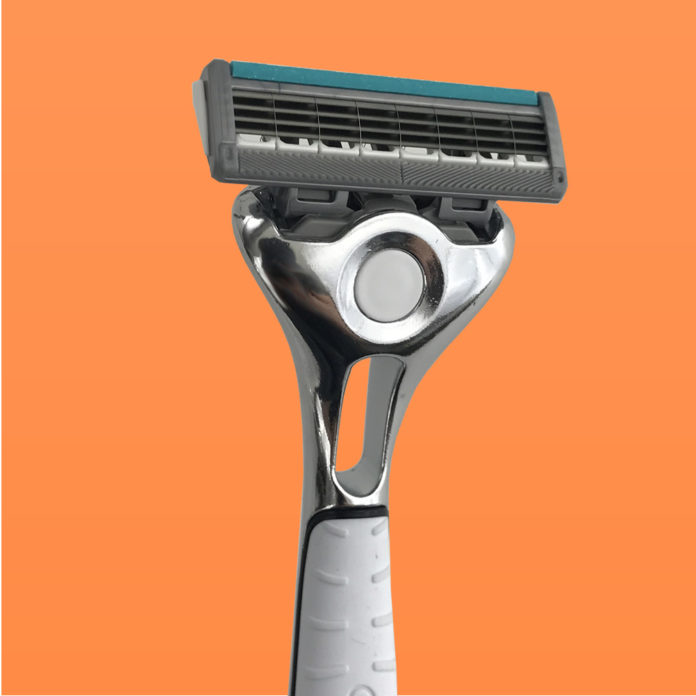 The Quattro Titanium from Schick may not be the company’s most advanced razor (that crown currently goes to the Hydro 5), but it is our favorite from the brand. The unique razor offers four blades, and a system of thin metal wires that go over those blades to provide what we thought was an extremely comfortable shave. In fact, it’s become one of our Top 10 Razors.

GET THE SCHICK QUATTRO NOW

Schick is a big name in shaving, with a full lineup of razors, ranging from the high-end Hydro 5 (reviewed here) to three-bladed disposables.

The Quattro Titanium isn’t quite as fancy as Schick’s top-of-the-line razors, but that’s not necessarily a bad thing.

The razor features four blades with titanium-coated edges, along with a number of features you’d expect from any quality razor — lubrication strip, rubber fins before the blades, and a head that easily pivots back to shave around the face.

But it was another feature that we have never seen on any razor that we’ve tested before that caught our attention… and what we think created a shave that was among the most comfortable we’ve had. Surprisingly, we didn’t see the feature mentioned on Schick’s website or the Amazon listing for the razor.

The Schick Quattro Titanium features tiny “micro” wires that span the cutting edge of the blades. To us, this literally small innovation created an extremely comfortable shave that let the razor glide over our face, without sacrificing closeness. We bought our test razor from Schick, via Amazon. The razor came with a handle and three cartridges (along with a plastic blade cover), all encased in a plastic bubble packaging.

While these sorts of packages are notoriously hard to open, there is a panel on the backside that can be easily torn open to get your new razor.

The packaging is much nicer than other razors we’ve received and is the same as what we’ve seen in stores. If you are looking for decent packaging to give the razor as a gift, this would fit the bill versus some of the blank cardboard boxes we’ve seen from other razors come in. On the surface that Quattro Titanium looks fairly basic and comparable to other refillable razors. But there are some special features when you start to look closely.

Handle
The Quattro handle design is simple and masculine. In many ways, it’s almost a throwback when it comes to style. Instead of lots of complicated grips and shapes, it’s a straightforward design.

First, the handle profile is circular (meaning it’s round, like a pen or pencil). Along the top of the handle you have a white rubber grip with a number of raised ridges. The underside features the same rubber grip, running the length of the handle.

Near the head of the razor there is a bent neck and a large cutout. We actually like to shave with our thumb on the underside of the head and index finger on the top (essentially “pinching” the neck). Because of the cutout and bend, we had a great place to grip the razor.

Overall, however, the grip of the handle is just ok. While there is a lot of rubber tread, the handle still felt a bit slick in our hand while wet. As well, apart from the bend at the neck, the handle is straight and tapers toward the end. Without a bulb or bend at the end like you find with most handles, there is nothing there to catch on your hand, making the it feel less secure to us.

According to the packaging, the Schick Quattro is made in Germany. Cartridge
As we mentioned (and you could guess by the “Quattro” name), the razor features four blades. According to Schick, these blades are coated in titanium and diamonds for a better shave.

Below the four blades are a number of angled rubber fins designed to help pull the skin tight before the four blades make a pass. After the blades is a lubrication strip, which contains aloe, Vitamin E, and B-5, according to the Amazon listing.

On the backside of the Quattro Titanium is a single precision blade. This allows you to get close in without the razor head getting in the way.

What about pivoting? The razor pivots nicely, with a motion that goes both back and then slightly down. This way, the pivoting wraps around a center point. That means even when the head is pivoted all the way back, the pressure from the handle is still positioned in the center of the blades so that they all offer consistent pressure applied. This is a much better way to pivot than those that simply bend at the base of the razor. We’d estimate the razor pivots back about 45 degrees from its resting position.

To us, however, the biggest feature on the cartridge is one that we haven’t seen mentioned anywhere on the Schick website or on the package. Covering the blades are seven tiny wires, spaced out evenly across the razor. The wires are so small, we’d consider them about the width of a hair. Why are these important? As you’ll see in our section on shaving with the Quattro Titanium, the wires seem to keep the razor’s edge just slightly off the face. That means the razor cuts hair close, but the wires help keep the razor moving smoothly.

Shaving with the Schick Quattro Titanium

We’ve tested lots of razors with tons of different bells and whistles. From razors that vibrate when you shave, all the way down to inexpensive disposables. We’ve even tested the Schick Hydro 5, which would be considered a step up from the Quattro.

Not only did we like this razor better than the Hydro 5, but it was up there with our favorite razors that we’ve tested.

To us, shaving with the Quattro Titanium was one of the most smooth shaves we’ve had. That’s not to be confused with “slick.” Some razors have tons of lubrication that lead to a shave that can be slimy, or you don’t have much control because it’s so slippery. With the Quattro, the shave was instead just simply smooth across the face, and we think the wires that span the edge of the blades had a lot to do with it. The best description we can give you for how the shave feels is to take a pen or a pencil, turn it sideways, and run the side of the pen down your cheek. To us, this is what shaving with the Quattro Titanium felt like.

The razor breezed through hair without pulling, tugging, or nicks and cuts. In fact, you couldn’t really feel it cut. The razor simply guided over the face and hair was gone. Multiple times we even let our facial hair grow for a couple of days to give the razor more of a challenge.

Meanwhile the pivoting head made quick work of shaving around the jawbone and underside of the chin.

In fact, the only real issue we had was the shape of the handle. Given the circular profile and the lack of any sort of “bulb” or bend the handle we felt like grip could have been slightly better. However, this was a minor complaint.

Overall, we were extremely impressed with the Schick Quattro Titanium. It deservedly earns a spot in our Top 10 Razors.

With four blades and the thin wire over the razor’s edge, we thought that cleaning the razor might be an issue. After all, this leaves a number of spots for hair to get caught.

In general, cleaning was easy. A quick rinse under the shower removed hair, although we did notice some small bits of hair were caught in the wires sometimes. For us it wasn’t an issue, but if you have a lot of facial hair, it could take a little longer to rinse it all out.

Like many decent razors, the Quattro Titanium carries a decent price tag, but it’s not outrageous. We bought our test kit for $8.99 on Amazon, that included a handle and three razors. A pack of four razor refills runs $8.49 on the site, or $2.13 each.

That’s cheaper than the price of $11.49 for four refills on Schick.com, although there you can enter your email address to sign up for a 20% discount.

In all, expect to spend about $2-3 per razor, which in our opinion is well worth it.

You can buy the Quattro Titanium at major retailers, or online at Amazon and Schick.com. We paid about $9 for a handle and three cartridges on Amazon. Refills are cheaper, running a little over $2 each. You can also buy directly from Schick, but we found prices to be slightly higher.

SHOP ON SCHICK
BUY ON AMAZON