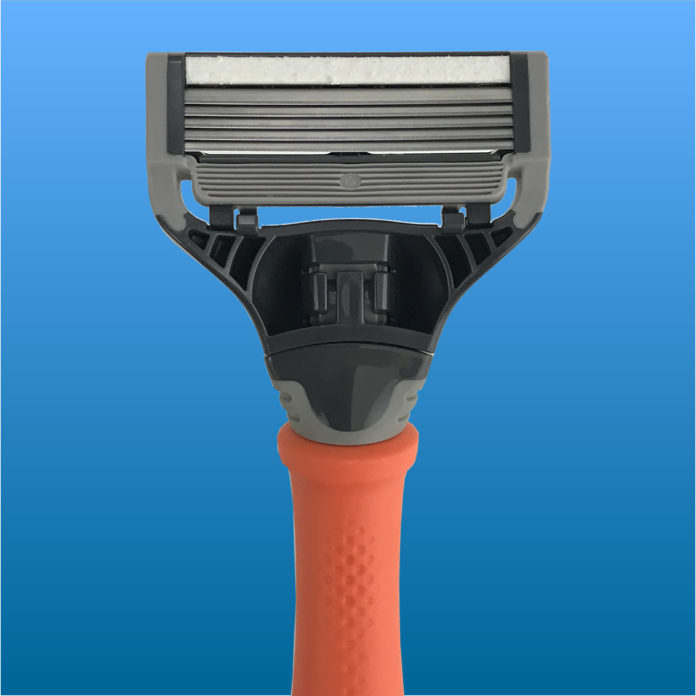 Affordable, stylish, and a good shave. What’s not to like about the Harry’s razor? With five blades and cartridge refills for $2 each, there’s a lot of value in the razor. It cuts well, and looks even better sitting in the shower or by your sink.

For years the shaving world was dominated (and in many ways still is) by big names like Gillette and Schick. But in the last several years there have been a number of new entrants into the market, offering more choices for consumers.

One of the most popular of these entrants is Harry’s. The reason for that popularity? In our opinion, no other razor comes close to matching the style of Harry’s signature Truman razor.

The sleek bright-orange handle has become well-known, even if you’ve never used a Harry’s razor before, you’ve no doubt seen it in advertisements. But there is a lot more to know about the razor apart from its looks.

From the story of Harry’s two founders that decided to do better than the big companies with their own independent German factory, to a strong social mission of helping men by donating 1% of sales to charity, there’s a lot to like.

But it all comes down to how it shaves. That’s why we recently bought our own to put to the test to see exactly what you get when you buy this definitely cool-looking razor.

We bought our Harry’s razor from Amazon. The kit includes a handle, two five-blade cartridges, and a razor cover that goes over the cartridge head.

It all comes in a stylish box, unlike some razors we’ve bought and tested before. If you were to pick this up as a gift, it would definitely make a nice impression.

One note: We bought our razor from Amazon, but for the same amount (or even less) you can get more by ordering direct from Harry’s. Their $15 set includes the razor handle, but also three cartridges (instead of two), the cartridge cover, and Harry’s Shave Gel. There is also an upgraded gift box option if you are buying for someone else.

When it comes to style, we have yet to find a razor that matches up with the Harry’s razor. Looking straight from the 1960s “Mad Men” era, its uniquely designed handle and head opts for simple and sleek compared to the more complex razors and handles you’ll find from other companies.

If you’re wanting something that looks great sitting beside your sink or hanging in the shower, look no further. 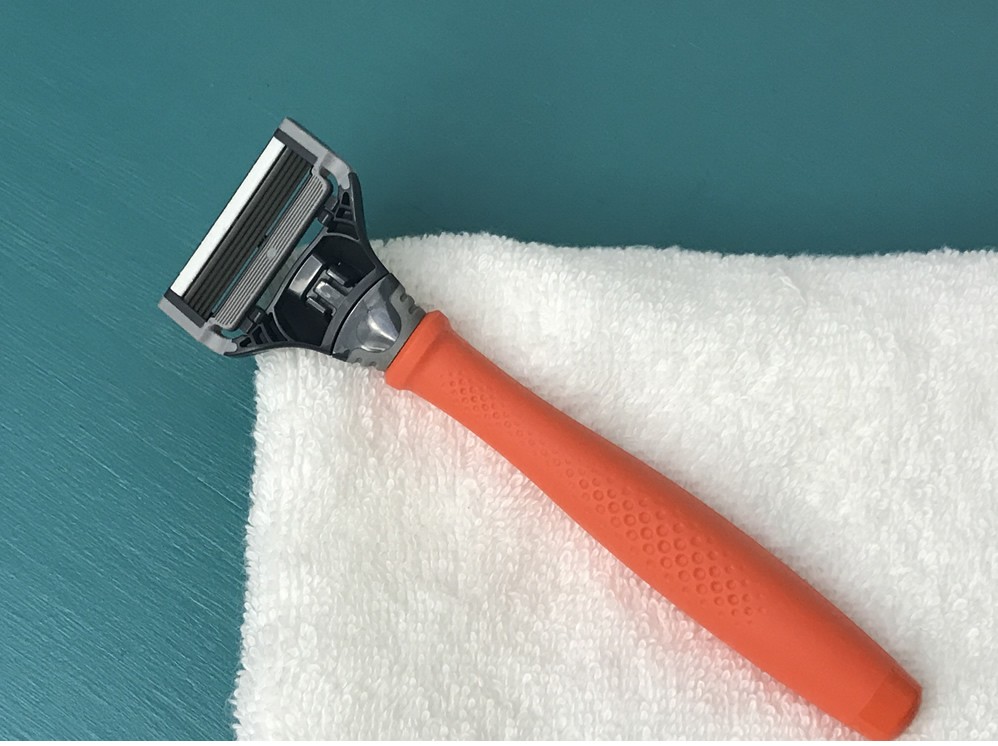 Handle
The handle of the Harry’s razor is a hard rubber. The best way to describe it is a cross between rubber and plastic. It’s hard like plastic, but with a rubberized feel. It doesn’t give under pressure.

One thing that stands out is that the handle is slightly slick. The back and sides are completely smooth, with dotted “craters” on the underside for grip. This smoothness looks great, but it can mean the handle feels a little less secure in the hand compared to other razors with much bigger rubber grips.

A ridge at the top of the handle makes a natural place to rest your thumb and index finger against to control the razor. Without the ridge, we would worry about our fingers sliding up.

The razor feels great in the hand in terms of size and weight. The handle is nice and thick, to where it doesn’t feel like you are holding a pencil. Instead, you know you are holding something substantial to shave with instead of something you have to hold gingerly.

We also liked the weight and balance. The handle has a decent weight to it, making it easier to control than some lighter and smaller razors. It’s also weighted toward the bottom, which provides a nice counterbalance when gripping near the head of the razor to shave.

Connecting to the razor’s head is done with a simple push, and it snaps on easily. To remove the cartridge, you grip on either side below the razor head and push up.

While the build quality of the handle feels amazing, there is some loose rattling where the handle inserts into the razor cartridge. 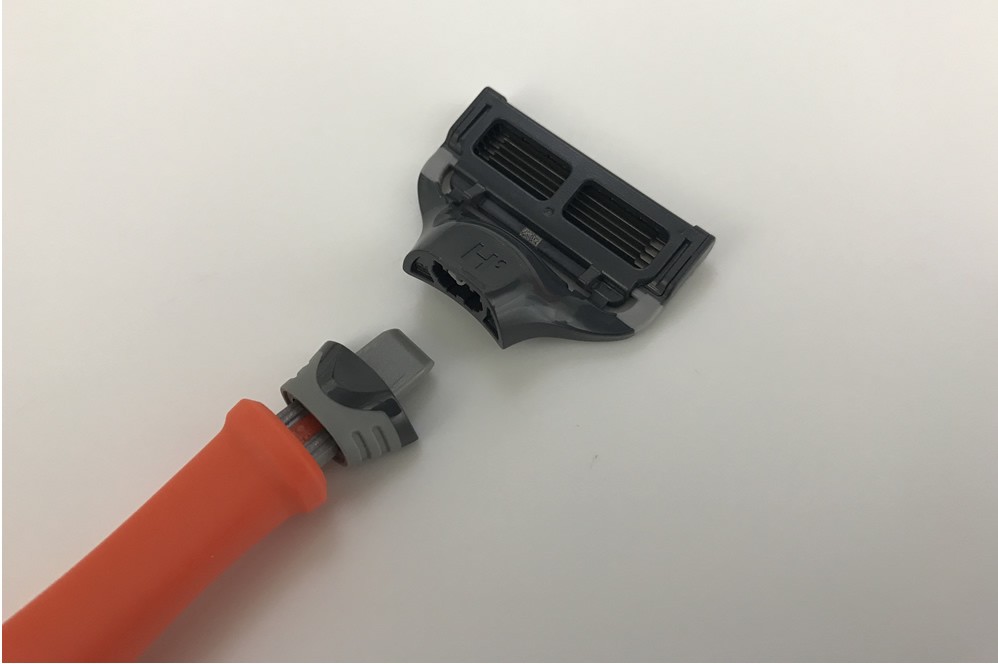 Cartridge
Harry’s razor cartridge consists of several features that you might overlook if you don’t know what you’re looking for.

First and foremost, it is a five-bladed razor. Compared to rivals like the Gillette Fusion5, the razor head is a bit larger. At the base of the blades is a rubber patch designed to help pull the skin tight ahead of the blades. There is also a lubrication strip at the top of the blades for your face as you finish a pass.

One thing we liked is that there is center support behind the razors. This support means that the blades can’t be pushed back in the center, giving a more consistent shave.

On the back of the head is a precision blade, which given the size of the razor head that’s larger than some others, you will likely use to help get tricky spots like under your nose. We’ll admit that usually we have trouble trimming with these blades on other razors. We just can’t quite seem to get the angle right for them to cut.

On the Harry’s razor, the precision trimmer is positioned well and we could easily use it during our shave. The cartridge head’s pivot is done with rubber connectors on each side, along with plastic pieces to stop it from going too far back or too far forward. The pivot is estimated at 60 degrees. There is some resistance in the pivoting. It’s a little stiff to push back, but does spring back well.

One thing to note is that the razor pivots at the base of the cartridge head, instead of in the middle like most razors.

The Harry’s razor is made in Germany.

Of course the razor looks great, but how does it shave? Does Harry’s put fashion over function?

During this test we followed our typical shaving routine, which meant shaving in the shower to let the warm water soften the facial hair. To lather, we simply use a glycerin-based soap.

Using a brand-new blade in the razor, we were pleased with the first shave. To us, it provided the perfect amount of resistance when shaving, without any nicks or cuts. You could feel the razor pull across your face, but it didn’t pull on hair or do so uncomfortably.

On other razors we’ve tested the first shave can actually be too smooth. New lubrication strips can make the razor head a little too loose and feel harder to control. While Harry’s does have one of these strips, it didn’t make our face slick (more on this in a moment). Instead, we felt like we had perfect control. 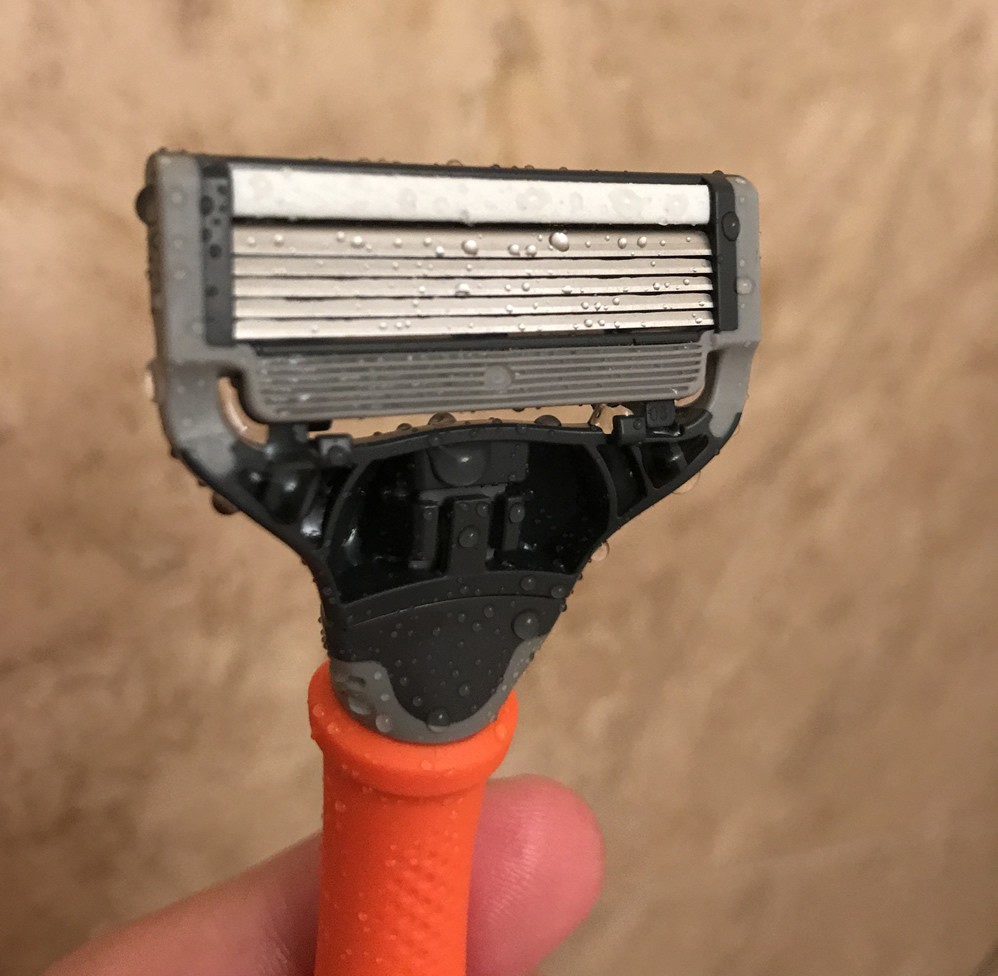 Overall, our shave was comfortable and close. We also found the razor comfortable to hold in our hand. One thing that could be improved is the grip of the handle. We mentioned that it felt a little slick when dry. When wet, the moisture seemed to improve the grip but there were still times when it slipped as we picked it up.

Our fingers naturally gravitated toward the ridge at the top of the handle, offering nice control while shaving.

There were a couple of small issues that we noticed with the Harry’s razor. One thing to note is that we felt the lubrication strip was for show. We didn’t notice it when shaving. In fact, even after using the razor several times the strip still looked practically brand new.

The second thing is that the all the blades don’t feel like they have similar pressure as you shave. Due to the pivoting point being at the bottom of the blades, the first blades (near the pivot point) feel firm against the face. The upper blades feel like they are farther away and don’t cut as much.

Even so, we still felt the razor offered a nice shave.

Smooth surfaces are always easier to clean. With a smooth handle, most of the razor is pretty easy to wash down, without a lot of gunk left after shaving.

The razor’s head was also easy to clean as a simple rinse would take out the cut hair. Below the blades, however, the cartridge has a number of open spots that caught hair and soap while shaving. Even after rinsing for a few seconds, the spots would still hold debris. It was only by making sure we focused water directly into them that they would come clean.

If you shave at a sink, this wouldn’t be an issue as you have a large stream of water from the faucet. In the shower, we had to direct a small jet in the right place to get the cartridge clean. It wasn’t a major issue, but did take a few extra seconds.

Even so, the razor does come clean. Even its smaller parts like the rubber fins at the base of the razor are large enough that hair can rinse out instead of being caught and held.

If you’re someone that likes everything tidy, then you’ll also like that the lubrication strip at the top of the razor didn’t degrade easily. 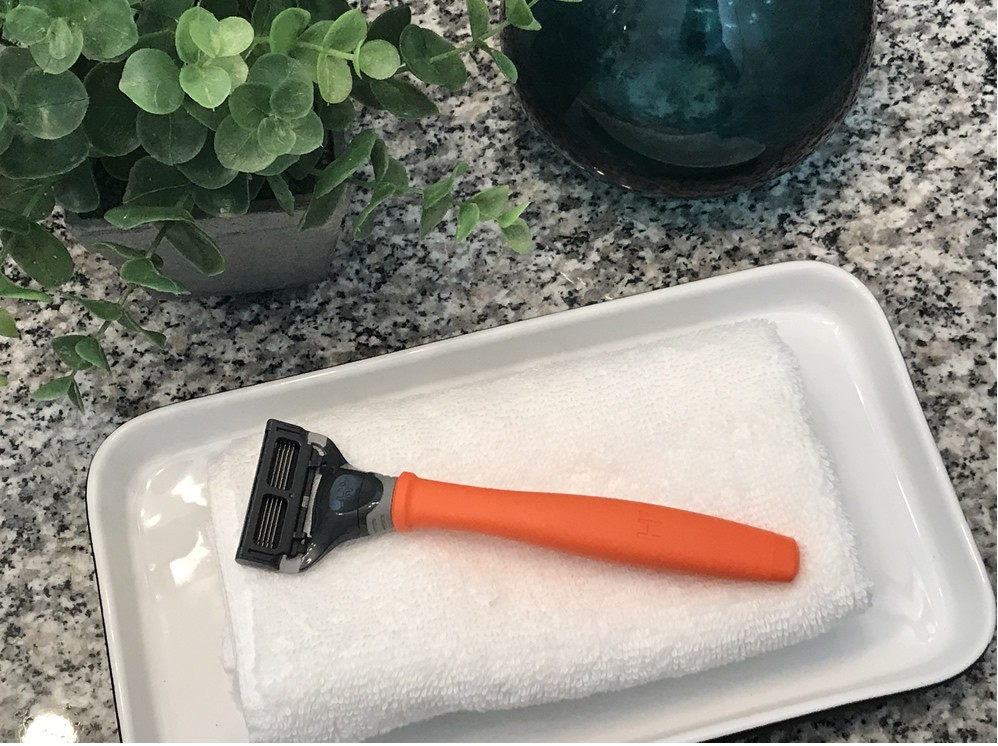 We bought our Harrys’ razor on Amazon. For about $16 we received a handle, two razor head cartridges and a head cover. It turns out that price is considerably higher than if we had simply bought the set from the company directly on Harrys.com.

Harrys.com offers a couple of cheaper options to get you started. You can get a “Starter Set” that includes the handle, one cartridge, a travel blade cover and foaming shave gel for just $8.

If you know that the set is something you want for the longer term, then you can get the “Truman Set” that includes the handle, three cartridges, shaving gel and travel cover.

If you want to shave in style, it doesn’t get better than Harry’s. The razor is one of the coolest looking we’ve reviewed, and offers a solid shave. Beside the shave and style, Harry’s is also affordable. A starter kit with a blade and cartridge is just $9. A pack of 8 blades runs just $2 each on Harry’s website.

BUY ON HARRY'S
BUY ON AMAZON