If you have sensitive skin, then this razor might be the answer. It features an extremely light feel when shaving that’s unmatched in comfort. The downside? We found that the shave missed spots on the first pass. So while it shaved lightly, it also meant we had to go over areas again to get a clean shave. If you have sensitive skin, the razor might be for you. If not, then we’d suggest something that shaves better on a single pass.

GET THE GILLETTE SKINGUARD NOW

While the razor world moves toward more and more blades (five blades seems to be the standard today), the Gillette SkinGuard goes the exact opposite direction. This razor has only two blades.

The reason for so few?

Gillette has designed the razor to provide a shave that causes less irritation. If you normally have a difficult time with skin that doesn’t feel great when shaved — or razor bumps — then the SkinGuard could be for you.

In addition to a specially-designed blade layout, the razor also has a number of other features built in that you’ll find in the company’s Fusion lineup, including dual lubrication, microfins, precision trimmer and a handle that’s the same as the well-reviewed Fusion5.(The SkinGuard cartridge head is actually interchangeable with the handles from the entire Fusion lineup.)

While we don’t have any issues with sensitive skin when shaving, Razorist recently bought the SkinGuard to see how it shaved and if it felt any different than a normal five-blade razor from Gillette.

We purchased our test SkinGuard razor from Amazon. Many of the razors we’ve tested from Gillette and bought from Amazon come in plain cardboard boxes.

This razor, however, came in commercial packaging like you’d find if you bought in a store. Inside was the handle, along with two cartridges. If you’re familiar with Gillette’s lineup of Fusion razors — then you’ll already know many (but not all) features that you’ll find with the SkinGuard. Handle
The handle that comes in the package is the same one that comes with the company’s Fusion5 razor, just with different colors. To us, that’s a definite positive as the handle on the Fusion5 is one of our favorites.

First, the feel and weight of the handle are both solid. To us, it wouldn’t hurt to have slightly more weight in the handle, but it certainly doesn’t feel light or cheap. Like other Gillette razors we’ve tested, it just seems to ooze quality.

The shape of the SkinGuard handle is very nice. There is a slight curve to both the head and the base, providing a solid grip. As well, the handle features a “tear drop” style bulge at the end, providing a lot of security in the hand.

Along the top of the handle is aggressive rubber grip with different types of tread to make sure your fingers don’t slip. The underside features thick grip down the entire handle.

What we like most about the handle is the “Y” at the head of the handle. It makes a natural spot to put your thumb on the underside, and also has a rubber spot you can rest your thumb against so it doesn’t slip.

On the top of the handle there is an oversized button with rubber coating that’s used to disconnect the razor head from the handle. It takes firm pressure to push, so you won’t accidentally bump it when shaving and have the cartridge fall off.

The handle was made in Poland. 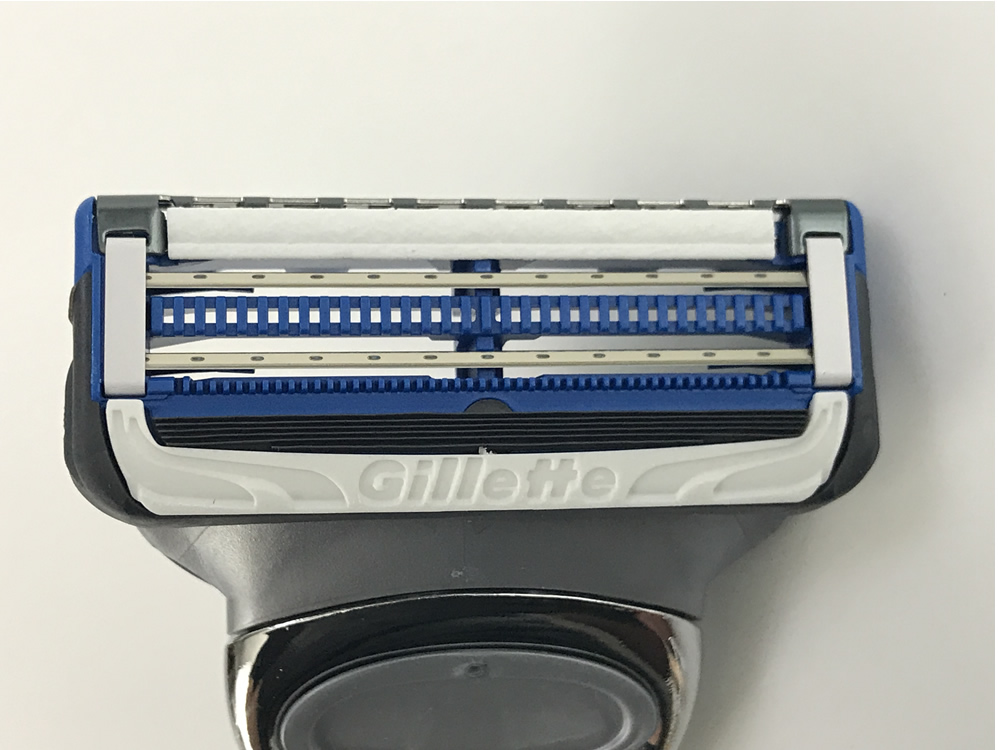 Cartridge
The handle of the SkinGuard is the same as the Fusion5, however, the cartridge is unlike anything else in the Gillette family.

That said, it does have several features common to other razors in the group. First, like the ProGlide Chill or Shield, it features two lubrication areas (the white areas on the razor face). As well, there are rubber microfins to smooth your skin before the blades cut. The SkinGuard also has a microcomb right before the first blade, designed to straighten hairs before they are cut.

On the backside, there is a precision trimmer — a single blade designed to get in tough-to-reach spots.

Of course, the big draw to this razor is the layout of the blades. As noted, instead of five blades packed closely together in the razor head, there are only two blades. These blades are spaced widely apart, and in between is the “SkinGuard.” This wide plastic piece pushes down against the skin to help keep it from bulging up between the two blades when they pass.

This is by far the most unique blade layout we’ve ever seen. Both blades are much wider set than on any other razor we’ve seen, and they also have a lot of flex back and forth. When pressed on, there is lots of give to their position. Shaving with the Gillette SkinGuard Note: As mentioned above, we don’t have sensitive skin or razor bumps from shaving. That said, we can’t speak to whether or not it works to minimize irritation. However, given the feel of shaving with the razor, we think it’s likely that it can provide relief to sensitive skin.

The best way to describe shaving with this razor? Feather-light. Other Gillette razors we’ve tried have been smooth — to the point to where it almost feels like you aren’t shaving at all. The SkinGuard? It takes that light feeling to another level.

Running it along our face, we barely felt the razor. With only two blades and a head that pivots easily, there is no feeling of the blades rubbing against your skin. What surprised us as well is that there were no tugging or pulling.

With so few blades, we expected some pulling as each blade seemingly has to do more work. Even after more than a week’s worth of shaving, we had yet to have any tugging. Several times we even let the hair on our face grow out for multiple days to give more of a challenge. It was no issue at all for this razor.

One other thing we liked is that even with two lubrication areas, the lube never felt heavy or “goopy.” In fact, we didn’t really notice it but had no issues with the razor gliding across the face.

Bottom line: If you get razor burn from blades putting too much friction against your skin, there’s a good chance that the SkinGuard will help.

It wasn’t all perfect, however. In fact, for us, the razor was far from it.

We found that we had to make multiple passes to shave everything, often coming at hair from multiple angles. Even then, after getting out of the shower and inspecting the shave in the mirror, we would find occasional hairs that weren’t cut. One spot that seems especially hard to get was near the corner of the mouth.

As well, it seemed to us that the shave wasn’t as close as we feel with other razors in Gillette’s lineup. Normally the razors in the Fusion series keep us smooth for a solid day. Just a few hours after shaving with the SkinGuard, it seemed like spots like under the chin were already feeling prickly.

Our opinion of the razor is simple. If you’re someone that suffers from irritation when shaving and have tried everything, then the SkinGuard is worth a shot. It does feel different (lighter) against the face than other razors we’ve tried.

If you don’t have sensitivity, then we’d suggest looking for other razors if you want a closer shave with fewer passes.

Sure the SkinGuard wins high marks for a light-feeling shave, but with only two blades, it’s also extremely easy to clean. Having only two blades that are set widely apart means that there is lots of space in the razor head. Debris and water flow through easier than with any other razor we’ve used. Sometimes cut hair would collect in the grooves of the lubrication strip, but this was minimal.

We bought the Gillette SkinGuard on Amazon for $9.97. That included the handle and two cartridges. At last check, it was priced at $9.49 and also had a $2 coupon available. Gillette.com sells the razor and four cartridges for $17 on its website.

An 8-count of razor refills runs $24, or about $3 each. According to Gillette, one cartridge should last up to a month. In our review we didn’t see any reason to think they wouldn’t. After more than a week of shaving the blades still cut well with no tugging.

You can buy the SkinGuard wherever razors are sold. Amazon offers a starter kit for about $10 that features a handle and two cartridges. You can also buy directly from Gillette, for $17 in a kit including a handle and four cartridges. Expect refills to run about $3 each.

SHOP ON GILLETTE
BUY ON AMAZON