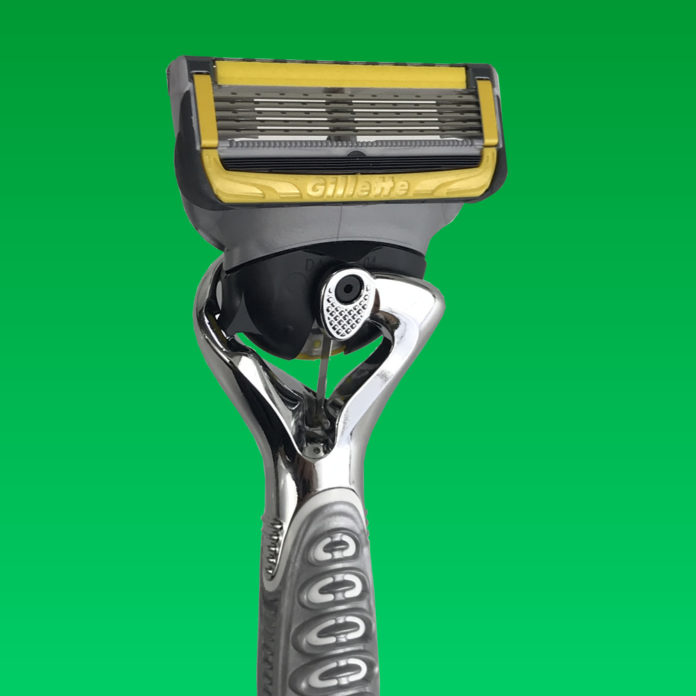 Gillette Fusion5 ProGlide Shield Power. The name is a mouthful, but so is what this razor can do. If you don’t like a lot of “bells and whistles” on your razor, you might not think this one’s for you. Don’t sell it short. While it has a lot of features — including a battery-powered vibration to make shaving easier — it gives a damn comfortable shave that’s worth the price in our opinion.

GET THE PROGLIDE SHIELD NOW

Looking for the top of the line from Gillette — a name that’s arguably the most well-known in shaving? This is it. Consider the Gillette Fusion5 ProGlide Shield Power the Mercedes-Benz of the razor world.

This piece has nearly every innovation that Gillette can put into razor. It offers five blades, lubrication before and after the blades, a pivoting head, and the Flexball that moves left and right.

But what gives the razor the “power” in its name is its battery-powered vibration. Turn it on and the razor begins vibrating. Gillette says the “micro pulses” produced help to reduce friction — meaning a smoother shave on your face.

We will admit, when we first bought the Fusion5 ProGlide Shield Power, we thought that all the touted features (especially the vibration) made it seem “gimmicky.” We thought the razor was something dreamed up by marketers instead of engineers looking for the best shave.

After using the razor, however, we stand corrected. To us, the shave feels the best we’ve ever had (plenty more on this below). It won us over convincingly.

Note: The Fusion5 ProGlide Shield Power is a mix of Gillette’s ProShield razor cartridge and the power handle. All of the company’s five-bladed razors (including the Fusion5 and the ProGlide) will fit on the power handle, giving you similar benefits. 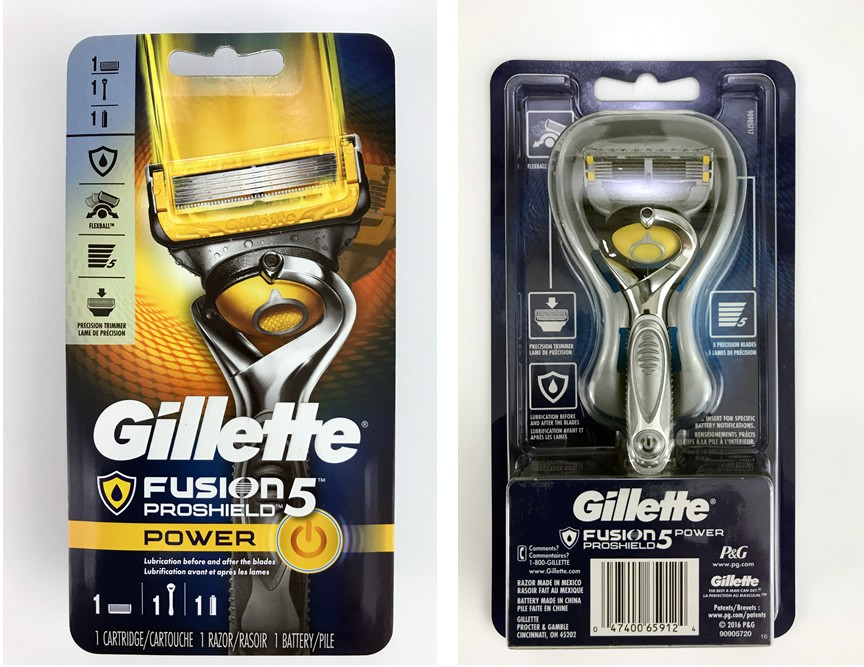 For our test razor, we purchased from Amazon. The purchase came in a commercial package like you’d get from a store. Inside the package contained a razor handle, AAA battery, a single razor cartridge, and a small case to hold the razor.

The set we bought is great for giving a test, but if you want to use it regularly, then you’ll need to also order a set of additional cartridges since this package came with only a single razor.

There is a lot packed into one razor with the Fusion5 ProGlide Shield Power, from the bottom of the handle to the top of the cartridge. 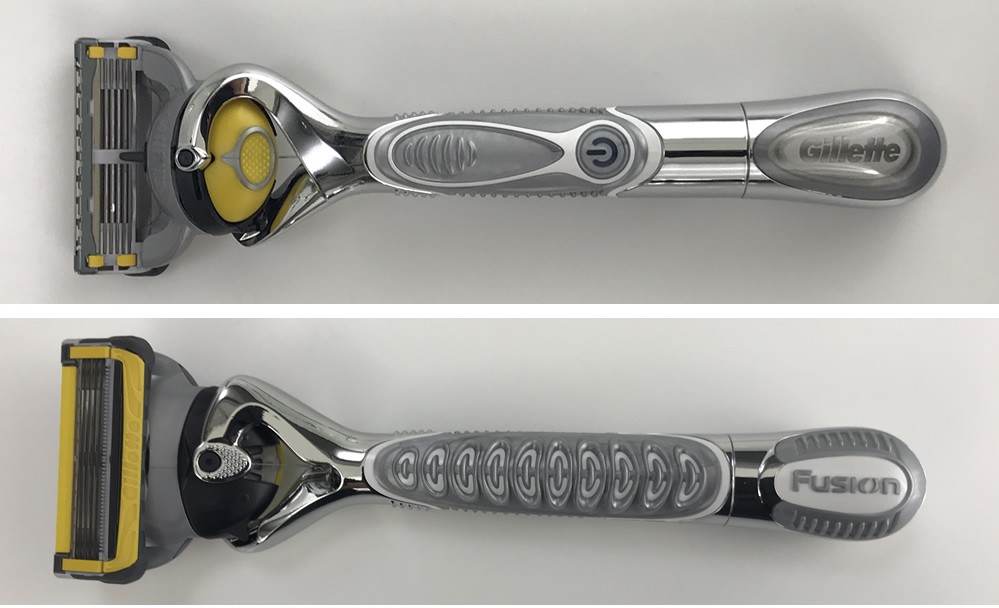 Handle
The first thing we noticed about the handle was its thickness. It’s a common complaint for us that many razors have handles that are too thin. While we don’t have massive hands, most handles feel like pencils when we hold them. For grip, we prefer a thicker handle.

This handle delivers. Because it has a AAA battery enclosed to power the vibration, and the rest of the handle and grip is built over the top of that, it’s a nice thick handle.

The grip is provided primarily by large, aggressive rubber treads that cover almost the entirety of the bottom side of the razor. On top is more grip, plus the power button for the vibration. The button is flush with the rest of the handle and takes a bit of pressure to push, so there is no worry about accidentally turning the vibration on or off.

To insert and change the battery, the base of the handle unscrews, revealing the AAA battery.

At the top of the handle is the Flexball, giving the razor head the flexibility to move about 20 degrees to the left and right. The center of the ball is the push button to remove the razor head. The entire area is built solidly and should last for years in our opinion.

Overall, the handle and razor feel solid in the hand. Nice and sturdy, there is no rattling or loose-fitting components when you shake it.

The razor is made in Mexico according to the packaging. 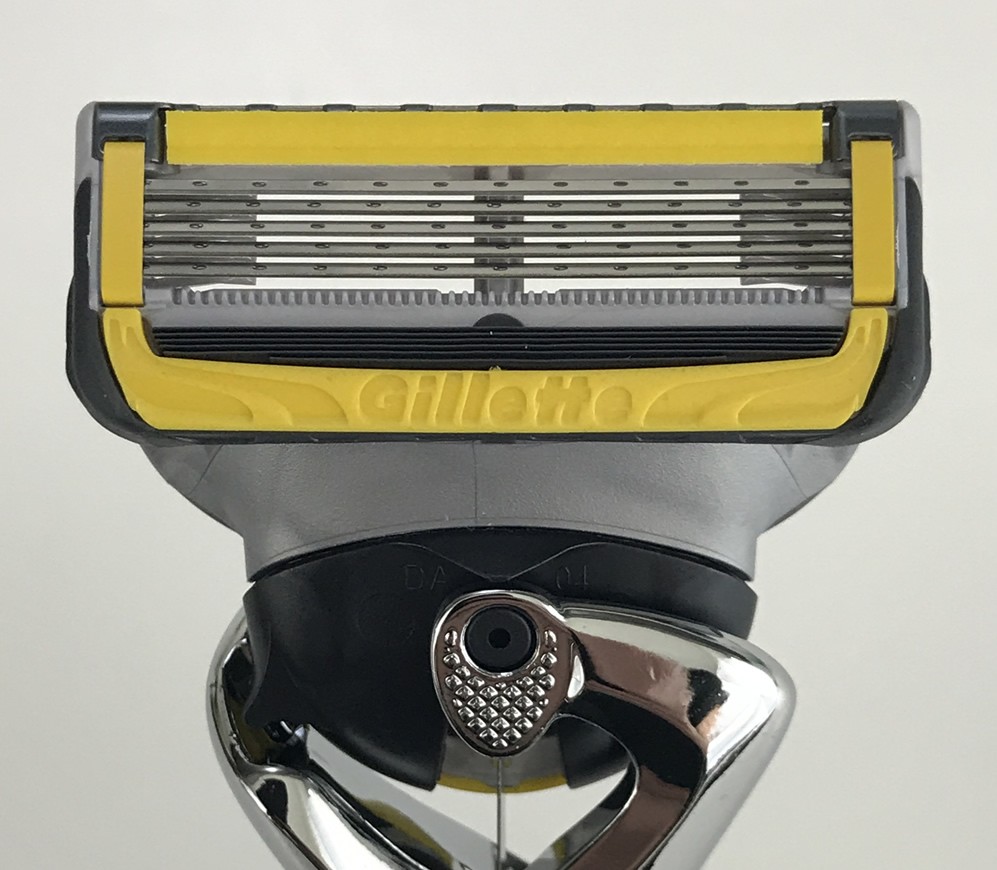 Cartridge
When it comes to Gillette’s lineup of five-bladed razors, it can be tough to keep track of the differences between them all. That’s one reason that many people will think it is easier to distinguish them by color.

The ProGlide Shield razor is the yellow razor in the lineup. At the top and bottom of the razor are lubrication areas. The top strip is similar to other lubrication strips you find on many razors. The bottom strip actually looks like it’s a rubber strip, but when it gets wet, it activates to start working.

This cartridge features five blades, plus a precision trimmer at the back of the razor’s head. One feature we like is that there is a middle support for the blades, so pressure in the center of the razor won’t push blades in as far as without a support bar.

Below the five razors of the cartridge are two other features. First, there are several small rubber microfins designed to pull the skin tight before the razor passes. Second is a unique feature not found on many razors.

The ProGlide Shield has a small plastic comb between the fins and the razor that Gillette says “helps to guide stubble to the blades.”

What about pivoting? Like other razors in this lineup, this one pivots nicely back without too much force. It’s more than enough to handle around the curves of the jawline or chin. We like that it also snaps back in place easily easily when pressure is released.

Here’s a full list of all the features on the Fusion5 ProGlide Shield Power:

Shaving With the ProGlide Shield Power Obviously we’ve shaved with a lot of razors. As we write this, the Gillette Fusion5 ProGlide Shield Power provides us with the best feeling shave we’ve had. Considering our initial reservations about all the features, we are surprised to think that.

To us, it starts with the handle. Having a solid and thick handle with aggressive rubber grips makes the razor feel secure in the hand, even when shaving in the shower like we do. At no point did we ever worry about the razor slipping out of our hand.

For testing the razor, we did several shaves with both the powered handle running and with it not running, so we could test the razor cartridge on its own merits.

Power Off
With the power off, the ProGlide Shield offers a nice shave. It was smooth and comfortable, pivoting easily around the face. Some razors with lots of lubrication lead to a shave that can feel slimy. That’s not the case with this razor.

The shave is smooth, but not slippery. There’s no trouble pulling through thick patches of hair and because it’s not slick, you feel as though you have great control.

In short, the shave with the power off is similar to what you’ll find with the rest of the Fusion5 series, which is to say that it’s a top-notch trim that’s smooth and comfortable.

Power On
Of course, the big feature on the Fusion5 ProGlide Shield Power is the vibration. Press the power button and the entire razor comes to life with a high-frequency vibration. When held in your hand there is some louder buzzing, but once pressure is applied to the razor’s head, it’s a fairly quiet hum.

To us, shaving with the power on put the razor’s performance up a level. We noticed that the vibrations had a couple of effects for us.

First, the vibration seemed to keep the razor moving smoothly. With a constant buzz, there’s always a small amount of motion to the razor’s head that will keep it from getting stuck. That meant no need to pick up and start again on a pass. A single pass would easily flow non-stop from top to bottom.

Second, the vibration made us feel like the razor was simply powering through even the thickest hair. And with the added vibration, you can feel exactly you have shaved and where you haven’t. It provided a reassuring buzz to the trim that lets you know it’s working and that you’ve shaved everywhere.

We loved being able to apply pressure to get a close shave, and if you’re worried that a vibrating razor would lead to cuts or irritation, don’t be. In our time shaving with this razor, we never had a single cut or nick when using it.

With lots of small features in the razor, it did take a little bit of effort to clean. Cut hairs would get caught in some places like the lubrication strip at the bottom and the microfins. In the shower we had to get the stream of water directly on these spots to clean them.

One good thing is that we never had an issue with the actual razors getting clogged. They were easy to clean, although those shaving longer facial hair might have an issue.

Also, you don’t have to worry about cleaning under running water. Despite having a battery, the entire razor is waterproof. There is a rubber seal on the battery case to prevent water from getting in.

If there is one drawback to all the features of the Fusion5 ProGlide Shield Power, it is that they can make for an expensive shave.

We bought our razor from Amazon and the price for the handle and one blade was $13. A pack of 8 additional blades runs between $30-$36 (around $4 each). That’s expensive, but remember that this handle will fit all of Gillette’s five-blade razors. So if you want, you can get a less-expensive refill razor head and still get a great shave.

The ProGlide Shield offers a lot of features… and a price tag to match. Even so, it’s among the best shaves that we’ve had and we recommend the razor if you don’t mind the cost. You can order the model we tested on Amazon, while Gillette offers the ProGlide Power. Expect to pay about $10-15 for the handle and a starter razor.