Razorist.com
Home Men's Razors Gillette Fusion5 ProGlide: Full Review & Is It Worth It? “It was flawless.” That’s a direct quote from our reviewer about the Fusion5 ProGlide. If you’re looking for a top pick among all the razors we’ve tested, this is it. High quality, with a ridiculously smooth shave, there’s a lot to like, which makes the ProGlide among our top picks.

GET THE PROGLIDE NOW

When it comes to advances in shaving, Gillette is without a doubt a leader in the field. One of its crown jewels is the Gillette Fusion5 ProGlide.

Previously known as simply the “Fusion” ProGlide, the razor is now called the “Fusion5” ProGlide. The Fusion5 part of the name comes from the five-bladed razor, which is interchangeable with the company’s other Fusion lineup (including the Fusion5, reviewed here).

This razor also features the “FlexBall” style of the handle, which includes a swiveling head that moves to the left and right to help match the contours of your face.

In short, there’s a lot of advancement that’s gone into this razor — and a lot of different features — making it one of the most complex that we’ve reviewed. For those who value simplicity over bells and whistles, all the features might be a turn-off. But for anyone wanting a smooth, comfortable shave, there is a lot to like. For our test razor, we purchased from Gillette through Amazon. The razor arrived quickly, but the packaging is extremely simple.

The razor came in a nondescript cardboard box. While it’s great from an eco-friendly standpoint, it’s not terribly attractive if you are planning to give as a gift. For people buying the razor for themselves, it’s no big deal. The benefit is that the box can be easily recycled after you get your razor.

The kit we bought simply had the FlexBall handle and four razor cartridges. Gillette does sell “Starter Kits” that include a travel blade guard and shaving gel.

Think of a razor and you might think it’s pretty simple. You have a handle, and a blade. The Gillette Fusion5 ProGlide shows that there is a lot more thought that goes into the design to give you a good shave. 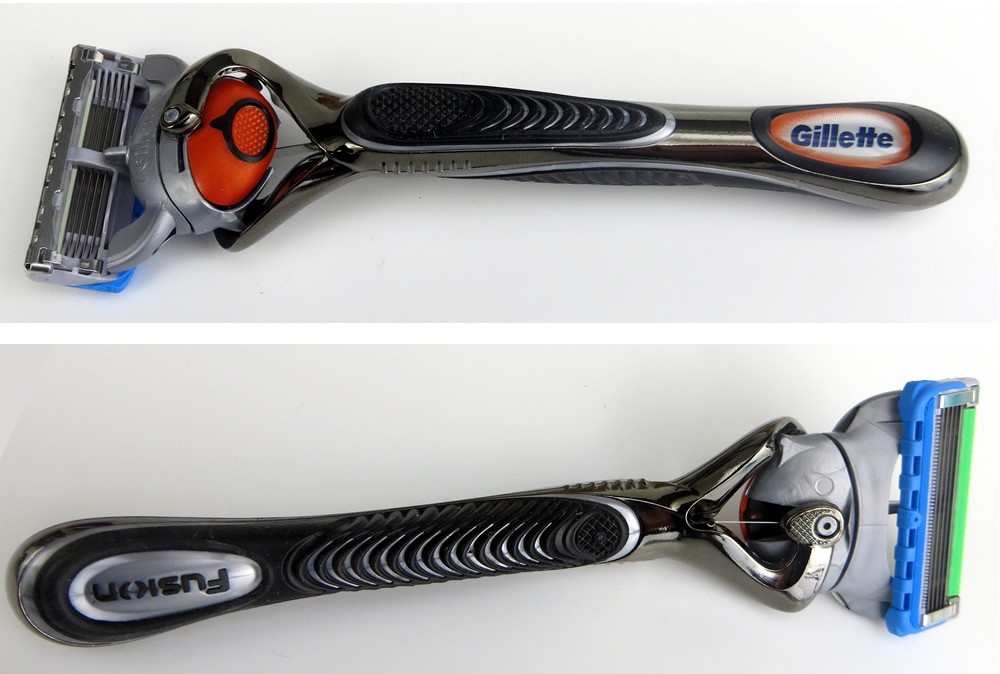 Handle
The handle of the ProGlide has a lot of similarities with the Fusion5. It’s a metal handle, but with several thick rubber grips on both the tip and bottom. In fact, the entire underside of the handle is essentially one big rubber grip with thick treads to make sure it never slips.

The weight of the razor is nice, although like the Fusion5, we do wish it had a little more heft. If you have larger hands, you might also want to have a slight thicker handle as well. It’s completely fine, but a bit thicker and heavier handle might give it a more solid feeling and more control in our opinion.

Of course, the big feature on the handle of this razor is the FlexBall. The large orange ball within the handle is actually a button to release the cartridge head. The pivoting happens at a point slightly above this button. This allows the head of the razor to move left and right by about 15-20 degrees each way. After the head pivots, when pressure is released it will spring back to the center.

The handle fits well into the razor cartridge head, with no rattles or loose play. To release, you simply give the orange button a firm push to change the razor.

One thing that’s nice is that this handle will fit the entire range of Fusion five-blade heads in the Gillette lineup, which include a number of different types, including some designed to cool, some with more lubrication, and some designed to reduce irritation.

The handle was made in Mexico. Razor
As mentioned, the razor includes five blades. The multiple blades are designed to give you a smoother and closer shave.

Below the blade are several blue rubber fins that help to pull your skin tight just before the razor slides over your face. Above the blades is the bright green lubrication strip. Gillette says it is 25% larger than the Fusion5 lubrication. We looked at them together, and the ProGlide strip does seem considerably larger. (More on how the lubrication felt to our reviewer in the “Shaving” section below.)

As with other Gillette five-bladed razors, the head pivots back with little pressure to help it move along the curves of your face. We’d estimate the range to be about 60 degrees. Once pressure is released, it snaps quickly back into place. The backside of the razor’s head has a single-blade precision trimmer designed to get in hard-to-reach areas like under the nose.

Shaving With the Fusion5 ProGlide

“It was flawless.” That’s one of the first things our reviewer told us when we gave them the ProGlide to try out.

Our reviewer has a thick, full beard growth, but normally shaves every 2-3 days. Their routine is to shave after showering, using shaving cream at the bathroom sink. Normally they use a disposable razor. Obviously a refillable razor like the ProGlide is a step up from what they were used to.

“I am very prone to nicks because hair grows in different directions. The first time I shaved with this razor, I did not have a single nick. That’s crazy given that it had been a few days [since last shaving].” 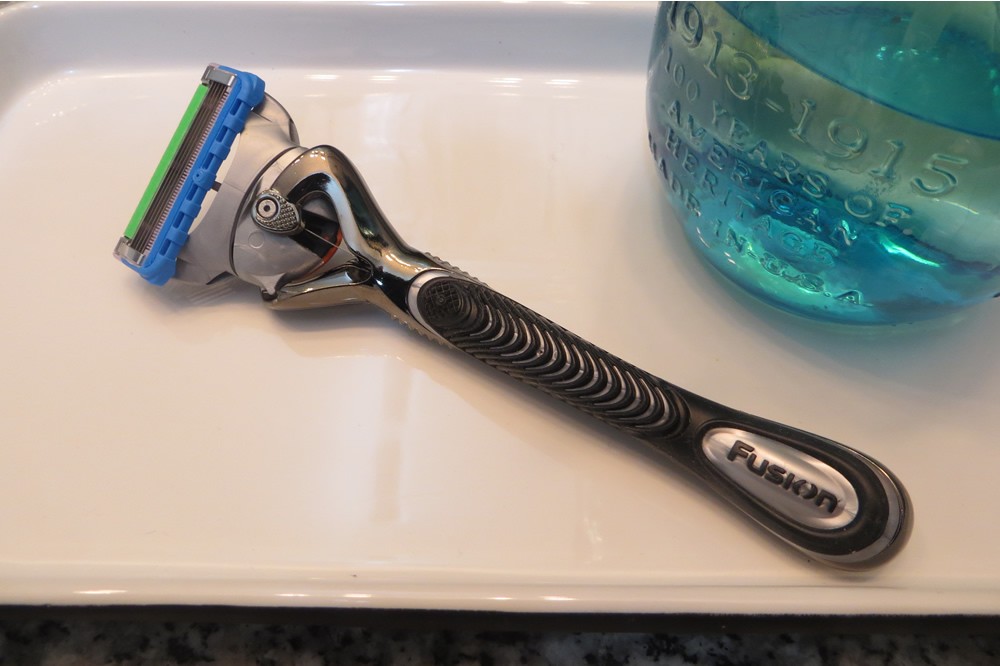 He noted that the shave was extremely smooth. “I felt like [the razor] was doing a lot of the work on its own.”

On the first shave the lubrication strip was “barely on the heavy side.” Our reviewer said the feel of the lubrication was noticeable, but not “gross.” It was easily cleaned with a towel wipe.

Count our reviewer as highly impressed with the ProGlide, especially comparing it to his usual method of using a disposable razor. To him, the shave was extremely comfortable and it stayed that way as he continued to use it throughout the test.

Flexball
One of the big features on this razor is Flexball. At the head of the razor’s handle where it enters the cartridge the razor pivots left and right. So is it a valuable feature? While it looks nice, it didn’t do much to impress our reviewer.

“I didn’t really notice it,” he said. “It’s not really something I’d go shopping for.”

While he loved using the Fusion ProGlide, the Flexball wasn’t a big selling point. If you don’t care about it either, you might be interested in the traditional Fusion5, which is similar, but doesn’t have the Flexball.

We asked our reviewer about cleaning the razor’s head. With the Fusion5, there had been some issues with hair getting caught in the rubber microfins.

With fewer fins, this wasn’t an issue in cleaning the ProGlide. A simple rinse under the faucet easily cleaned out hair and debris while shaving.

As mentioned, we bought the test razor on Amazon. The cost was $10, for a handle and four blades. That turns out to be a steal that’s not normally available. When we checked back a few weeks later, that price had jumped to $20.

Gillette.com offers the Fusion5 ProGlide for $22 for a handle and four razors. You can also get a starter kit with two blades, handle, travel cover, and shaving cream for about half that price.

If you’re someone who isn’t sure if a fancy razor is right for you, neither was our reviewer. However, he came away loving the shave. “It’s like driving a new car. Usually I don’t think I need all the stuff, but it ends up being really nice to use.”

Yes, the Fusion5 ProGlide can be pricey, but sometimes you get what you pay for. In this case, our reviewer described the razor as “flawless” and raved about its performance. You can order yours on Amazon or on Gillette. Expect to pay about $20 for a handle and four cartridges.