Razorist.com
Home Men's Razors Gillette Fusion5: Full Review & Is It Worth It? 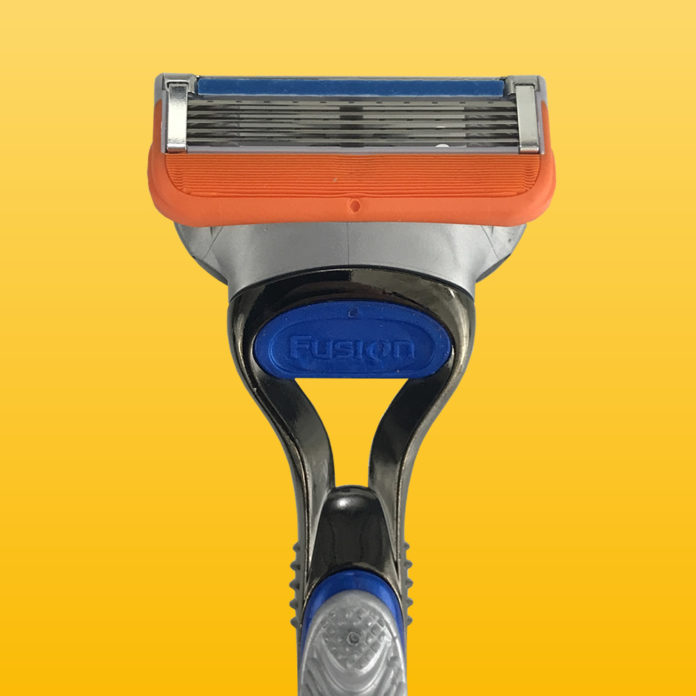 Gillette is known for offering top-of-the-line razors, and the Fusion5 is another winner. The baseline for for the company’s five-blade lineup, the razor feels high-quality and offers an unbelievably smooth shave.

If you’re looking for a great all-around razor that doesn’t have too many bells and whistles (while still offering a lot to like), then this is it.

GET THE FUSION5 NOW

Gillette Fusion5 sets a high standard when it comes to five-blade razors.

The company, which seemingly started the push toward more blades with its wildly popular Mach3, now offers a complete lineup of five-bladed razors including the ProGlide series. While the ProGlide lineup features a ton of bells and whistles (including a head that pivots side to side), the Fusion5 is more basic.

The razor seems to be aimed at those that want the closeness, smoothness, and comfort of a five-bladed razor, without the complication or wild features that can come from higher-end razors.

That’s not to say that you have to sacrifice by going with the Fusion5. The shave is among the smoothest we’ve ever had, and the razor head offers a number of features that provide a great shave.

All told, if you simply want a great all-around shave, then the Fusion5 is hard to beat. Our test razor was ordered on Amazon. It arrived within just a few days, in a nondescript cardboard box. If you’re wanting some fancy glossy packaging, then you might want to get it from ordering from some other vendor or picking it up in from a store.

Opening the box, the contents are simply the razor handle and a set of four cartridges. There was no stand or holder included.

While the box and packaging certainly seems spartan, it does get points for being eco-friendly. When you’re done with it, you can simply toss it into the recycling.

Gillette has long set a high bar for quality, and the Fusion5 is no different. Nothing about the razor handle or cartridge feels cheap. Everything feels high quality, although there are some cosmetic manufacturing flaws in some of the rubberized parts of the razor. 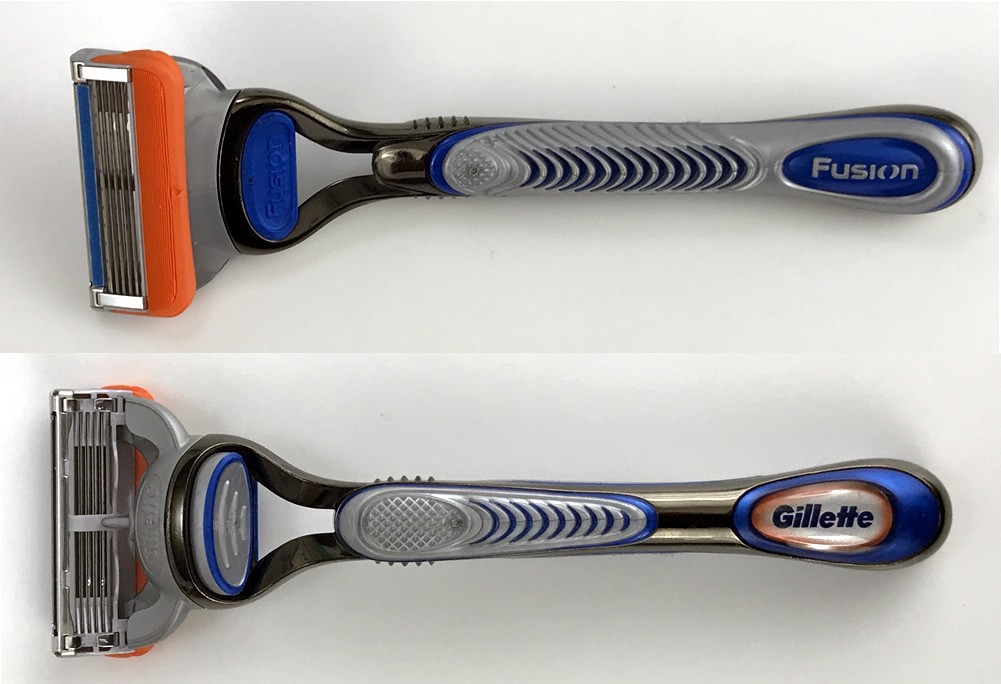 Handle
The handle is a metal base, overlaid with aggressive rubber grips on both top and bottom. With so many different grips and ridges, handing the razor is not an issue whether shaving in the wet or dry.

We especially liked the “Y” of the handle and the rubber grip at the base of the razor’s head. Our hand naturally felt comfortable here and it gave us lots of control while shaving.

The weight of the handle is decent, although we would prefer a little more heft. People with larger hands might feel like the handle feels a little too small in their hands, even though it’s as large as most other razor handles. Even so, it can feel a little too narrow in our opinion.

The handle’s connection into the cartridge is snug and secure. There’s no rattling. The connection points to the razor head are all plastic, but relatively thick. To connect, you simply push the handle into the cartridge. Disconnecting is done with a large button that’s oddly satisfying to push.

Note that the handle will fit Gillette’s entire lineup of five-bladed razors, including those in the ProGlide family. So if you find a razor head that you would like better or want to try out, you have a number of options. The Fusion5 cartridge offers a number of features to help provide a better shave. First the obvious — the razor includes five blades, offering a closer shave in fewer passes.

It would be better if the cartridge had a center support, but in our actual use it made little difference. Still, if pressure is put on the middle of the blades, they will bend.

The Fusion5 has a large orange base of what Gillette calls “microfins.” These small rubber fins pull your skin tight before the razor passes, flattening out before cutting. Compared to other five-bladed systems from the company, the Fusion5 has the largest base of fins.

Above the razors is a lubrication strip that’s activated by water. We liked that while you could feel it working, the lubrication wasn’t excessive. Sometimes these strips can feel “gooey” on your face. That’s not the case here. It makes the shave feel smooth, but not messy. If you’re someone who likes things being neat and clean, the strip can look used even after one shave.

On the backside of the razor head is a single blade “precision trimmer” that’s made to get hard-to-reach places like under your nose where the full razor won’t fit.

The razor head pivots back approximately 60 degrees with relatively little resistance. In fact, we’d actually like it to be a little tougher to push back as it can feel like you are pressing hard enough against your face while shaving. When pressure is released, the head pops back instantly.

Our tested version of the Fusion5 was made in Mexico.

Shaving With the Fusion5 Where the rubber hits the road is how the Fusion5 does for shaving. That’s where we were very impressed.

Our shaving routine is to shave while in the shower to allow the hair to soften. Using other razors, we’ve never had a complaint. Shaving has always felt smooth and easy. The Fusion5 made us question all of that.

The first shave the razor was the smoothest we’ve ever had. With almost no force the razor breezed through even the tough hair at the base of the chin. With the fresh blade and lubrication strip, at first we honestly didn’t even think the razor was cutting. The closeness of the shave was also good.

Earlier in the review, we mentioned how easily the head pivoted back. Combining that with the smoothness of the new blade and the lubrication strip was actually a little too much in our opinion. Slightly more resistance would have been an improvement in control. With no friction, the first shave felt like the razor slid too much across our face.

After the first use, however, there was slightly more resistance in shaving. To us, it was the perfect amount. It didn’t tug and pull; it simply didn’t slip and slide across our face like it did with the first shave.

Still, if you are someone that desires smoothness above all else, the Fusion5 may be the razor for you.

Precision Trimmer
The Fusion5 cartridge head comes with a single blade on the back of the head. This “precision trimmer” is found on many razors and is designed to get up close in hard-to-reach spots like under your nose. We’ve often had issues using these and the Fusion5 is no different.

Trying to cut with the precision trimmer blade felt awkward and like it didn’t work well for us at all. While it did cut, it took several passes to get the angle right and it didn’t feel very smooth — especially compared to the normal shaving with the razor.

One of the issues with multiple blades is that cleaning can be tough. With so many nooks and crannies, hair and other debris can get caught.

Cleaning the Fusion5 wasn’t bad. A rinse in the shower’s spray combined with a shake cleared out debris quickly from the blades. The only spot where we had a problem was with the microfins.

The small and flexible fins would catch some cut hair that didn’t want to rinse out. The fins wouldn’t fill with hair, but there were bits and pieces that would occasionally get caught.

While the Fusion5 provides a great shave, it’s not cheapest. We paid $15 on Amazon for a handle and four blades. You can get that for cheaper on Gillette.com ($14) if you use the code “Welcome3” to get $3 off your order. This also includes free shipping.

In our use, we’d estimate a life of 2-3 weeks for each cartridge for someone with a full, thick beard who shaves every day. Those who shave less often or don’t have full beards can easily get more life out of the Fusion5. After our test week of shaving every other day, the blade was still sharp and cut well.

Looking for a great all-around razor? The Gillette Fusion5 makes the grade. With five blades, a high-quality feel, and smooth shave, it’s hard not to like this razor. You can buy the Gillette Fusion5 anywhere that razors are sold. We suggest directly from Gillette.com or from Amazon.