The big appeal for the Dorco Pace 6 Pro is undoubtedly the price. You can buy 10 razors and a handle for just about $20, making it one of the best deals in shaving. But it’s not just the price that’s nice, it offers a decent shave with a six-bladed razor that’s among the most affordable you’ll find.

GET THE PACE 6 PRO NOW

Spend any time searching for razors on Amazon, and you’ll no doubt run into the Dorco brand name.

Dorco — despite the name not being familiar to most in the United States — is actually an industry veteran. The South Korean company has been in business since 1955. Today Dorco says that it has customers in more than 130 countries.

As a testament to its popularity, search on Amazon, and you’ll find multiple razors with thousands of positive reviews. Its biggest seller seems to be the Dorco Pace 6 Pro.

The Pace 6 Pro is the latest in the company’s iteration of its popular Pace 6 lineup, marking the next step from the Pace 6+, a solid razor that’s been popular for years.

One reason for that popularity is the value you get from the six-bladed razor. For about $20 you get a handle and 10 cartridges, which is enough for most people to shave for months, if not an entire year.

Razorist recently ordered a brand-new Dorco Pace 6 Pro — also known as the SXD1000 — to put it to the test. Here’s what we thought. As you’d expect from an economical razor, the packaging received isn’t fancy. It’s a simple cardboard box with a sticker label. On the plus side, it is eco-friendly, as you can toss the package into the recycle bin when you’re done.

Inside the box is a handle, plus the 10 blades in three cartridge holders. Having the holders is nice versus having all the razors loose. With so many blades you’ll be having them around for awhile, so it’s good to have a place where they can be held instead of having them loose in a drawer somewhere. The Pace 6 Pro offers a fairly simple design without a lot of the textures and shapes that can make many other razors look like they come from another planet.

Handle
The Pace 6 handle may not have all the bells and whistles you might find on modern razors like the “Shock Absorber” on the Schick Hydro 5 Sense or the “Flexball” from the Gillette ProGlide. Instead, you have a solid handle with nice weight that actually has a simple design. Considering the price point, we were expecting a handle that felt cheap in the hand. That wasn’t the case at all.

The underside of the handle is covered with a rubberized grip. Wet or dry, the rubber will help you keep your grip, even without lots of aggressive treads like you find on other razors.

The topside of the razor is primarily covered with black plastic that has a tiny pattern (it seems to be diamond pattern) etched into it. This part of the razor does get slick when the razor is both wet and dry.

The razor release button is a large and sturdy plastic slide with a green rubberized grip. It feels extremely solid when pushed forward to release the cartridge.

Finally the tip of the handle features the pivoting connection for the razor — a large two-pronged design that’s found on other Dorco razors. Because it offers the same type of connection as other Dorco handles, it will fit all of the other blades made by the company. That’s a nice feature and means you can purchase this handle and try out other blades if you find the cartridge that comes with it isn’t perfect for you.

The handle is made in Vietnam. Cartridge
As you’d expect from its name, the Dorco Pace 6 Pro is a six-bladed razor. While most high-end razors offer five blades, this is among the few razors your find with more. There is a middle support of the blades, which we consider a plus. This keeps the blades from shifting too much when shaving.

Flanking the six blades on both top and bottom are lubrication strips, which are advertised to contain both Vitamin E and aloe.

Flip the razor around and you’ll find a single-blade precision trimmer, designed to help you reach those spots like under the nose that you can’t easily get due to the size of the cartridge when used in a forward-facing position. During our test the precision trimmer worked well, but it took about a 45-degree angle to our face for it to start cutting.

The Pace 6 Pro cartridge fits snug and secure into the handle with a very satisfying click. There is some play in the connection, but it is minor.

When connected, the pivot point for the razor is almost to the middle of the blade, which is a good spot for it to be in order to apply even pressure across blades when shaving. The pivot does take some effort to push back compared to other razors. That pressure also means it snaps back into place quickly when pressure is released.

The blades are made in South Korea. 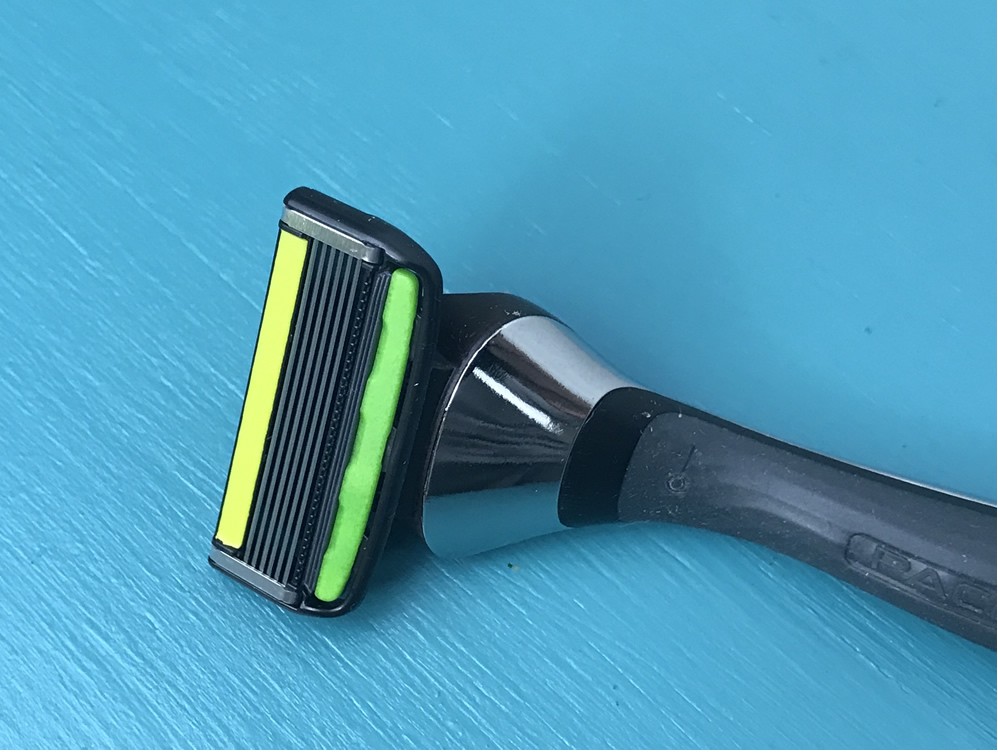 For a razor that essentially costs $2 per cartridge, the big question is how does it feel when shaving. In that regard, we were pleasantly surprised. While we wouldn’t say that the Dorco Pace 6 Pro gives the absolute best shave, for the price, it’s a solid choice.

Our routine is to shave in the shower, letting the warm water soften the facial hair. We then lather with soap.

Under our normal routine, the razor felt comfortable with no pulling, even after several shaves over the course of a week. That surprised us, as we thought the blades might dull quickly given the cost. That wasn’t the case at all. Depending on your beard growth and how often you shave, we’d expect a single cartridge to last 2-4 weeks.

While the Pace 6 Pro comes with dual lubrication areas, the amount of slickness was not excessive. There was no “goopy” feeling that can be found on some razors, especially in the first couple of uses.

The shave was comfortable, but we did have some issue with the pivot. As mentioned above, the pivoting head on the razor took more pressure to push back than we normally see. That meant on places that use a lot of pivoting movement to shave — in this case under the curve on the chin — the shave wasn’t as neat. Instead we had to go back over to make sure we got everything. In general the shave was close, but we did feel like it could be closer on the curves of the face such as under the jawline and the higher parts of the neck.

One other thing that could be improved is the handle grip. We like to hold the razor near the cartridge when we shave, with the thumb on the underside and our first two fingers on the top. On the underside the area closest to the razor doesn’t have any rubber grip, which made the razor feel slick in our hands.

Bottom line, apart from a few quibbles, the shave provided by this economical razor was decent. If price is a concern, then you could do a lot worse than the Pace 6 Pro. It’s well worth the money. With six blades, there is a lot packed into the razor’s head. That means lots of spots for hair to get caught. In general we didn’t have a big problem cleaning the blades, but cut hair did get caught between blades, even after rinsing. As well, hairs were caught in the bottom lubrication strip.

To us, the fact that the razor didn’t come completely clean after rinsing wasn’t a big deal. However, after a few shaves the cartridge certainly didn’t look near as nice as when it was fresh out of the box.

Without a doubt what will get most people interested in trying this razor is the price tag. We purchased our test razor directly from Amazon. It cost $20.99 for the handle and ten cartridges. That comes to about $2 per blade.

If you shave intermittently or have a light beard, we think that would be enough to last 8-12 months. That’s a definite deal, especially for a six-bladed razor with a refillable handle.

Note: If you read reviews on Amazon, you’ll see some mention of a product change. Before the Dorco Pace 6 Pro, there was the Dorco Pace 6+. We personally used the Pace 6+ for years and were quite happy with it. To us the Pro is a solid razor at a good price point, but we actually preferred the Pace 6+.

You’ll find the Dorco Pace 6 Pro available on Amazon. It runs around $20 for a handle and ten cartridges. It’s not our favorite razor we’ve ever reviewed, but the value compared to the shave is hard to beat.

Note: This review contains affiliate links. Razorist earns a commission for purchases made through these links, at no extra cost to you. Gillette Fusion5 ProGlide...
View Post
Men's Razors

Note: This review contains affiliate links. Razorist earns a commission for purchases made through these links, at no extra cost to you. The Quattro Titanium...
View Post