Dollar Shave Club. The name is catchy, even if a bit of a misnomer. Though you’ll pay more than a buck for this razor, what you do get is a great all-around razor that provides a nice shave… and it doesn’t cost a lot of money. If you’re looking for a subscription service with a good shave, this might be it.

GET THE DSC EXECUTIVE NOW

With a great name and a bold idea that shaving doesn’t have to cost a fortune, Dollar Shave Club burst onto the scene just a few years ago. It doesn’t hurt that it offered some clever commercials that were a hit on the Internet:

What Dollar Shave Club (DSC) did that was revolutionary is that it moved from just selling a razor to selling a razor subscription. Now you could sign up and have a new set of blades delivered every 1-3 months. It took away the risk of shaving with a dull razor — or simply running out of blades. Today, all the major razor brands now offer subscriptions.

Of course, the popularity of a company can’t just survive on branding and marketing alone. That’s where DSC razors come into play.

Dollar Shave Club offers several different types of razor, but the flagship seems to be the Executive — a six-bladed razor that’s a direct competitor to the big boys like Gillette and Schick. (Today, DSC is owned by Unilever.)

Of course, signing up for any subscription seems like a big commitment that you might be cautious to do. That’s why the Razorist recently signed up to try out the Executive razor to see if it’s worth the money and how it shaves. After signing up on the Dollar Shave Club website to order, the Executive actually arrived in a simple cardboard pouch. Sure that might be the sexiest packaging, but it does the job, is recyclable, and means less waste than elaborate packaging.

Inside was the handle, four cartridges and an introduction card that gives you a bit of info about the subscription and how to get help with your account if you need it.

What sort of design goes into the Executive from Dollar Shave Club? While the price is low, there are a number of features that you’ll like. Handle
Despite the price tag, the first thing we noticed when picking up the handle is that it does not feel cheap. It features a blend of metal, rubber, and plastic, with a nice weight to it. We also like the thickness of the handle. Some razors can feel almost like you are holding a pencil. This one feels nice and substantial in the hand.

As for grip, there are tons of rubber grips, including along the bottom, sides, and top of the handle. The only areas without rubber are around the neck of the razor and along the underside near the cartridge. In this spot there is an indentation for the thumb to rest.

At the bottom of the handle it comes to a “bulb” that juts out to keep your hand from slipping down and makes a natural spot to hold the razor securely.

At the head of the handle is the attachment point for the cartridge. It’s a two-pronged point that also pivots. This connection is thick and well made. We can’t envision it ever breaking. To release the blade there is a small button that slides forward. This is the only point on the handle that felt even a little “cheap.” It has some play in it, instead of being a nice tight connection.

There was no statement we saw about where the handle was made. However, as the Executive appears to be a re-branded Dorco razor (more on this below), it was likely made in Korea. 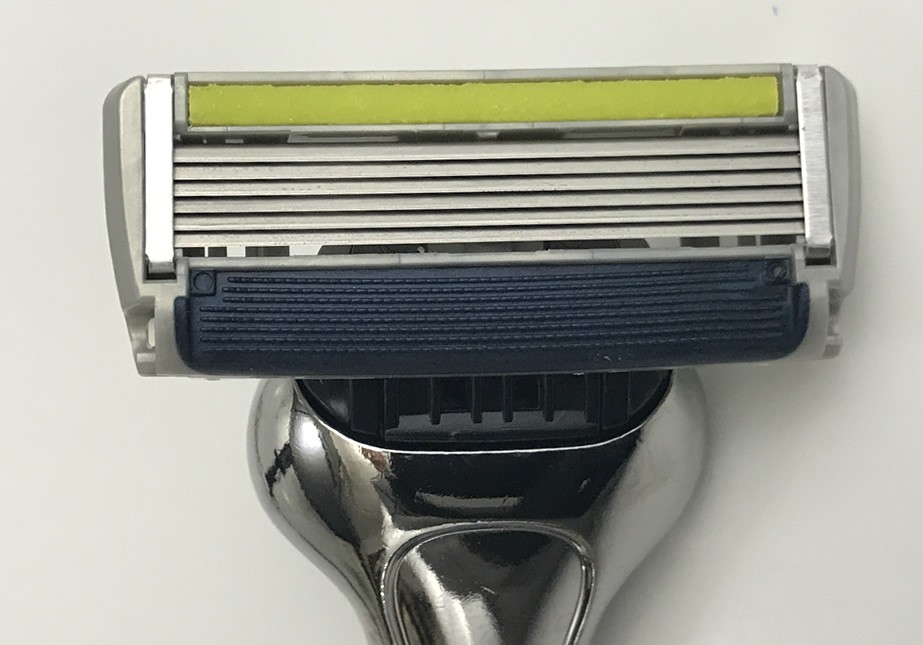 This razor also comes with a precision trimming blade on the back. Simply turn the razor over and you can get those hard-to-reach spots or have a better view of where you are shaving without the rest of the cartridge in the way.

As for pivot, The angle seems to be less than what we find on most razors. We’d estimate most razors will pivot the head back about 60 degrees. The Dollar Shave Club Executive moves back about 30 degrees. The pivot also needs more pressure than some other razors, but snaps back firmly once pressure is released.

When placed in the handle there is very little play in the connection between the handle and cartridge. As we mentioned before, while the price is low, this is not a low-quality razor. 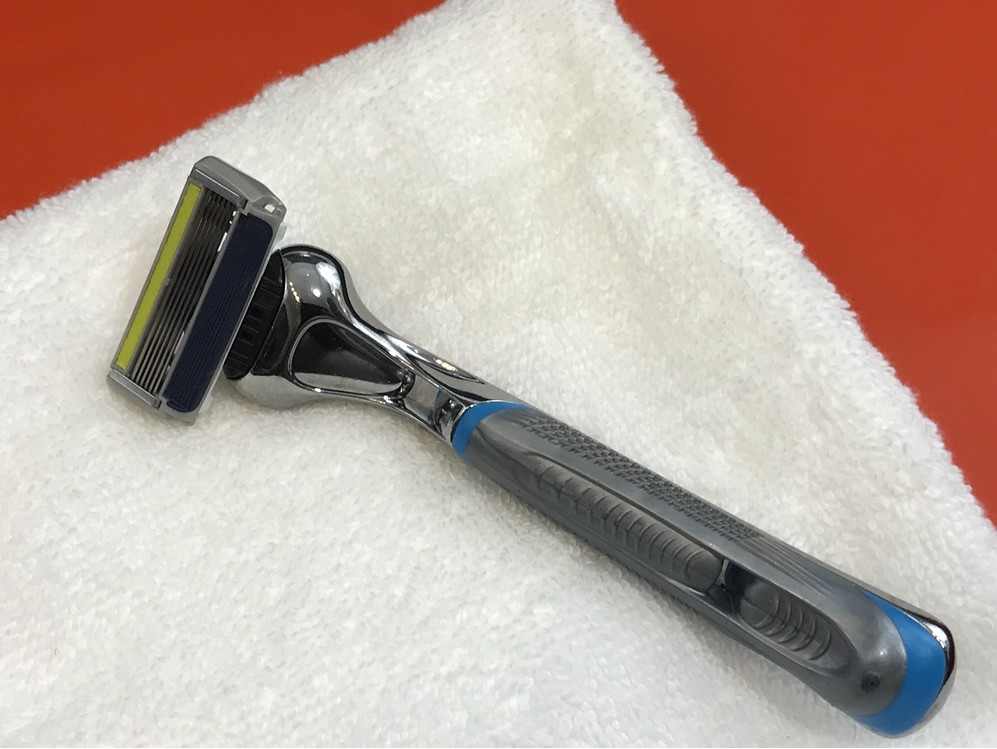 You can have all the clever commercials in the world, but if you can’t deliver a good shave, then what’s the point?

For us, the Executive from Dollar Shave Club delivered. It’s not the absolute best razor we’ve reviewed, however, it’s a solid choice that has a lot to like.

Our shaving routine means shaving in the shower to let the warm air and water soften our facial hair. We then lather up with glycerin soap.

Using our normal routine, we found the Executive to give a good shave. It had no problem cutting through several days of growth, with no nicks or cuts. Even after a couple of weeks of shaving, it still cut flawlessly. These blades did not quickly go dull.

That’s not to say it’s completely perfect. While the shave wasn’t uncomfortable, the razor could glide more smoothly across the face. This isn’t a razor that moves so smoothly that you don’t even feel it. We felt the pressure and the blades cutting. For most people, we don’t think this will be an issue. If you are used to extremely smooth shaving with lots of lubrication, it could take some getting used to.

All in all, however, the Dollar Shave Club razor had no issue tackling our hair growth. Despite not pivoting as much as some other razors, there were no issues around the jawline.

Bottom line: It’s not the smoothest shave we’ve ever had, but the Dollar Shave Club razor is still high quality and does the job well. To us, it can hold its own against more expensive razors from bigger names.

It’s always a trade-off when you have a lot of blades in a single razor head. Many blades means they need to be closer together. That can lead to clogging and having a hard time cleaning.

While we didn’t have issues with clogging during shaving, the closeness of the blades did mean it was harder to clean debris out from between them. This was especially the case on the edges of the razor. Expect to spend a little more time cleaning than you would with a razor that has fewer blades.

While the name is Dollar Shave Club, expect to spend a few more bucks on this razor. Our kit we purchased from DollarShaveClub.com for $10 included a handle and four razor cartridges.

Just know that when you sign up, you are actually purchasing a subscription. You can select how often you want new blades to show up at your house. Need new blades once a month? Then you can select that. Only need them every three months? That works too. Each four-pack of blades is $10 or $2.50 each.

If you don’t want the subscription, then you can easily cancel. There are no start-up or cancellation fees, so it’s simple to adjust your plan. In fact, after you cancel you can go into your account and simply purchase items subscription-free.

One other thing to note is that simply purchasing just the razors can be tricky. The website makes you go through a quiz about your shaving and grooming habits to then offer a bundle of different products. You’ll then have to deselect these other items to get just the razor.

The actual page to buy just the handle and blades is a little tougher to find, but we’ve linked it below.

Note: One other thing to now is the Executive razor actually seems to be a re-branded version of the Dorco Pace 6 Plus, which was for sale on Amazon for some time and proved very popular. The Pace 6 Plus is made by Dorco, a major razor manufacturer from South Korea.

Now the razor available on Amazon is the Dorco Pace 6 Pro, which is a different version, but slightly cheaper than the Dollar Shave Club razor. In our tests, we actually prefer the Pace 6 Plus (aka the Executive from DSC) to the Pro version that’s for sale on Amazon.

The Dollar Shave Club Executive is a great razor without a high price tag. You can get the razor directly from DollarShaveClub.com. Below, we’ve linked directly to the razor, as well as to the homepage if you need other items for your shaving routine.