Amazon’s Solimo is the mega-company’s “house brand” razor. As with many other things Amazon, it aims to offer what name-brands do, but at a fraction of the cost. Our thoughts? It’s a good, not great razor, but it’s hard to beat the price tag. If you’re interested in a refillable razor with all the latest features for only about $1 a cartridge, then this is it.

GET THE SOLIMO 5-BLADE NOW

In the past several years, there’s been a big push among new companies to bring down the price of shaving (e.g. Dollar Shave Club). At the same time, Amazon has steadily introduced its own product lines that are designed to compete with popular brands, but at lower prices.

It’s only natural that the company would eventually have its own razor lineup. That’s exactly what the Solimo is.

Amazon sells the Solimo in a starter package with a handle and two razors for about $7. But if you want the best deal, then you’ll want to opt for the set that includes the handle and 16 razor cartridges for only $18.

Typically with inexpensive razors, you have to sacrifice a number of features. That’s not the case here. The Solimo comes with tons of features that you normally only find on expensive razors — especially the “MotionSphere” head that pivots left and right. The MotionSphere is this razor’s answer to Gillette’s “Flexball” found on its high-end lineup.

With a low price tag and a lot of features, we were excited to review Amazon’s Solimi five-bladed razor. Here’s what we thought…

If you’re familiar with the lineup of Amazon Basics offered on its website, then you know that the brands tied to Amazon aim for simplicity. That’s the case here.

As the house brand for Amazon, Solimo offers everything from dog treats to sunscreen, all with simple packaging and low prices. This razor came in a cardboard and plastic pack. Inside was the handle, along with two cartridges with plastic covers. The packaging wins points for being recyclable. 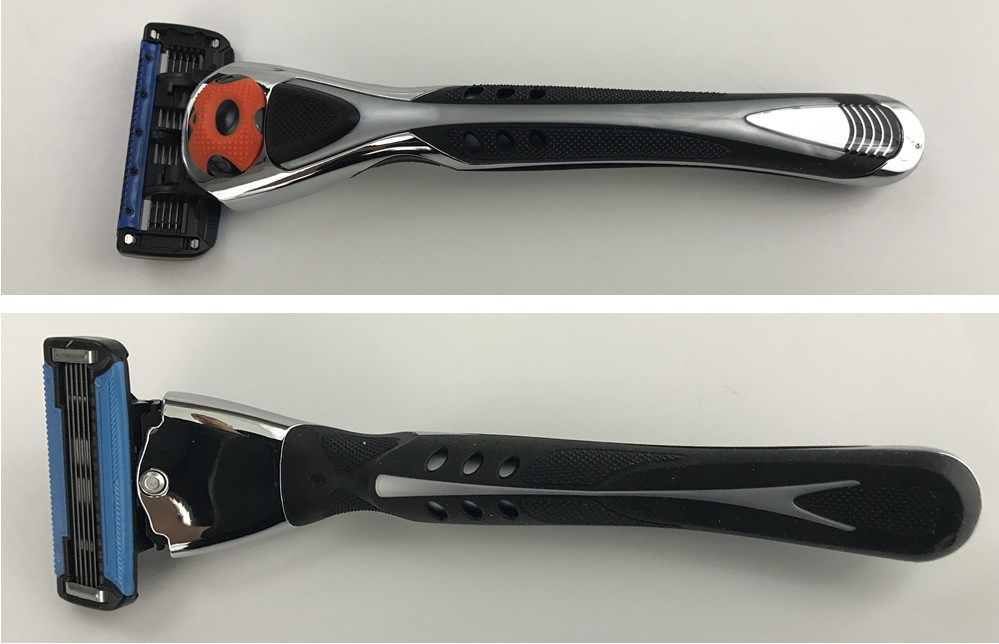 The Solimo razor packs a lot of features, but something about the handle design just seems to say “discount brand” to us. If you aren’t worried about appearance, it’s not a big deal.

Handle
The Solimo handle features plenty to like. It offers decent weight, and bends at both the head where it attaches to the razor cartridge and at the base of the handle means it feels secure in your hand.

As for grip, along the top are two rubber patches that run the length of the handle, and a triangle-shaped spot just below the orange button that releases the razor head. All of these areas include a fine diamond pattern cut into the rubber to improve the grip.

On the underside you’ll find rubber grips down the entire length of the razor, except for the underside near where the handle connects to the cartridge.

More importantly for grip, however, there are a number of contours that help to steady the hand. For instance, the middle of the handle has a circular profile, while the end is square. There are also two contours in the neck that provide a natural place to grip the razor. The most interesting part of the handle, however, is the “MotionSphere.” This is the large orange button that catches the eye (slide it forward to disconnect the razor) but is also the internal pivoting of the razor. With the MotionSphere, the razor will pivot left and right to help you move around the face.

The Solimo handle is made in China. Cartridge
Solimo offers both a three-blade and five-blade razor cartridge. In this case, we bought and tested the five-blade version.

The first thing we noticed about the cartridge is that it is big. In fact, it might be among the largest that we’ve reviewed. Compared to the Gillette Fusion ProGlide — which also has five blades, the Solimo cartridge is an 1/8″ taller. That may not sound like much, but it actually is a noticeable difference.

Where does that extra size come into play? Unlike the faces of many razors, Amazon’s Solimo is quite open, with spaces above and below the blade. If you’re someone who deals with clogging on a normal razor, this extra space may help those hairs flow through.

Features of the razor include a large area of rubber fins at its base, which helps to smooth out the skin before the blades pass. Above the blades is a massive lubrication area. While most razors have lubrication strips, this is almost a lubrication field. It’s large, including a thicker area in the middle and it also wraps around to the top of the razor.

(Note: The marketing material on Amazon shows there being a lubrication strip at the bottom of the razor’s head. We didn’t have this on our razor. It seems to just be rubber fins.)

On the backside of the cartridge is a precision trimming blade (helpful given the size of the razor’s face). Oddly enough it’s hard to actually see this blade so we weren’t sure it was there until we actually ran this area across our face. As for pivoting, the MotionSphere gives a left/right pivot but the razor also has the classic back and forth pivot as well to get around areas like your chin and jaw. We’d estimate the pivot is about 35-40 degrees, and it moves back easily with only a little pressure.

The blades are made in the United States, with steel from Japan or Sweden. The cartridge is assembled in Mexico. So how does this razor shave? In our opinion it does everything a more expensive razor can do for you, just not quite as well as the pricier options.

For our test, we tested the razor repeatedly, often letting our facial hair grow for a couple of days before shaving.

All in all, the shave from the Solimo razor is good. We had no issues with tugging or pulling, and the blades sliced easily through any hair in its way. Because of the ease of the pivot from the MotionSphere and the front/back pivoting, it made quick work around the contours of the face without any fuss. (Honestly, we’ve found that the left/right pivot on razors doesn’t do much for us. It’s nice to have, but it’s never been a dealbreaker.)

One thing that we especially liked was the lubrication. We find that many razors provide nice lubrication on the first shave or two, but then it quickly wears out. That’s not the case with the Solimo.

So if it provided an easy shave, why didn’t we think the shave was great?

To us, it just didn’t quite match the level that we’ve seen in some higher-end razors. For instance, the pivoting action isn’t quite as solid as we feel with the Gillette ProGlide. It feels less precise and not as high quality. In effect, it’s similar to buying a luxury car versus an economy model. The less expensive car will still get you where you want to go, but the ride may not be as nice.

As well, we had issues with the grip. While there is plenty of rubber grip, the tread on it is relatively low. Like a tire with low tread having trouble gripping the road in the rain, we noticed that the handle felt slick when wet and soapy during the shave.

Truth be told, these are relatively minor issues compared to the low price tag. If you’re looking for value, don’t be scared. This razor provides a solid shave.

As you might expect given the size of the razor head and the open areas above and below the blades, most debris was easily washed through. We did have some stuff get caught between blades, but it wasn’t anything significant.

If you have a lot of facial hair and normally have issues with clogging, then look toward three-bladed razors that typically have more space between each blade, allowing for easy cleaning.

Of course, the big draw to this razor is that it has a number of features to compete with higher-end razors, but won’t break the bank. We bought our test version with a handle and two cartridges for $7 on Amazon. That price isn’t anything special, but they also sell a set with a handle and 16 cartridges for $18. That’s just over $1 per razor, plus the handle. It should be enough to keep you shaving for about a year for less than $20.

Want to try the Solimo? The natural place to buy is from Amazon as it’s part of the company’s family of brands. A starter set with a handle and two blades is about $7, but if you want better value, go with the bigger set. A kit with the handle and 16 cartridges runs less than $20.